The Fribourg licence area has been shaped by the cities of Fribourg and Bulle. With around 80,000 single-family homes and condominiums, the entire area offers potential sales of up to 5 million Swiss francs, just in the area of real estate sales. If a licence partner wishes to specialise in the sector of letting as well, he can benefit from a further 50% rent share on average.

Engel & Völkers is already well represented in the neighbouring regions with branches in Bern and Nyon. A new location in Fribourg would strengthen Engel & Völkers' cross-selling and supply system, not only in French-speaking Switzerland but also on a national level.

Are you interested in the real estate market in and around Fribourg and would you like to successfully manage the Engel & Völkers licence? Find out more about our free license area in the article below and get in contact with us. We are looking forward to hearing from you! 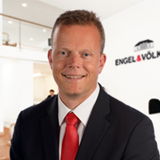 Fribourg - economic centre and gateway between German- and French-speaking Switzerland

From medieval to modern, from urban to pristine, university town and business centre, Fribourg is full of contrasts and simultaneously the gateway between German- and French-speaking Switzerland. Anyone who counts among the more than 80,000 inhabitants of Fribourg and its conurbation particularly appreciates these numerous facets of the region and the high quality of life that accompanies them.

As a result, the Canton of Fribourg is experiencing a steady increase in the population coming from the surrounding regions and abroad, which in turn is making the property market flourish throughout the canton. Compared to the rest of Switzerland, real estate prices are still quite moderate, which also has a positive impact on the real estate market.

The Engel & Völkers licence area of Fribourg, comprising 147 municipalities, covers almost the entire canton of Fribourg as well as a few municipalities in the canton of Vaud. It extends from Corcelles-le-Jorat in the west via Delley-Portalban in the north, Plaffeien in the east to Haut-Intyamon in the south. The most popular locations are Fribourg, steeped in history as the economic centre of the canton of the same name, Gruyères, which received the title of the most beautiful village in French-speaking Switzerland in the history of the region, and Bulle, the second largest city in the canton of Fribourg and the gateway to the La Gruyère region.