The story of an artistic masterpiece painted over 500 years ago by Florentine Michelangelo Buonarroti is now being re-enacted using immersive techniques by Venetian Marco Balich.

In 1508, when Michelangelo Buonarroti first laid beneath the ceiling of the 20-metre-tall Sistine Chapel, little did he know that he would spend the next four years painting face-up in an uncomfortable, even painful, position. What he did know was that his colleague Bramante considered him a novice in fresco painting, as did several other Roman painters, envious of the commission the Florentine sculptor had been granted by Pope Julius II. And so upon receiving a substantial deposit of 500 gold ducats, he built a special scaffolding and went to work. He finished the complex decoration, covering nearly 500 square metres, in just four years, working almost entirely on his own. Michelangelo's interpretation of the Genesis became a major overnight success, and in 1534 the artist went back to the Sistine Chapel to paint the Last Judgement, another enormous fresco that occupies the entire wall behind the altar. 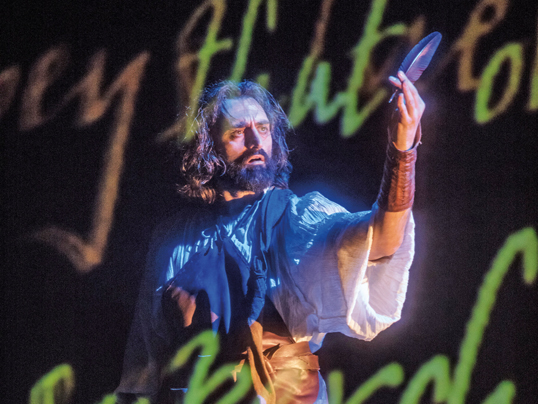 More than 500 years on, praise for the great Renaissance master's work has only grown. Every year, 5 to 6 million visitors pass through the Sistine Chapel with an upward-facing gaze. They admire the colours, the composition, the richness; but very few are aware of the emotional and historic world out of which the work was born. This is where the Venetian Marco Balich comes in, a major event producer and expert in the codes of emotion. Balich is not intimidated by large numbers – whether in terms of costs, or spectators. Through his production company, Balich Worldwide Shows, he has designed and organised the opening and closing ceremonies of multiple Olympics; his work at the Rio games was seen by over 3 billion people. Four years ago, the large event organiser decided to embark on a new challenge: to recount the beauties of Italy, only this time as a producer. His chosen subject: the frescoes of the Sistine Chapel. The result, presented at the Auditorium Conciliazione in Rome, was the Last Judgment: Michelangelo and the Secrets of the Sistine Chapel, an immersive one-hour show in a new live event format based on an extraordinary blend of art and entertainment. Balich recounts the birth of one of the world’s finest art masterpieces, the torments and reflections of the artist, and 16th century-Rome using state-of-the-art technologies, immersive projections and live performances. And the audience is right at the heart of the action, with 270-degree high-definition projections and hall-filling choreography. Balich has a knack for enrolling outstanding artists: the show’s main musical theme, a 13th-century Dies Irae, has been adapted and is performed in Latin by Sting, with Michelangelo's voice provided by Pierfrancesco Favino, music by John Metcalfe, choreography by Fotis Nikolaou, and sound design by Mirko Perri.

The show’s collaboration with the Vatican Museum has proven pivotal. Not only did the museum provide ultra-high-resolution images of the frescoes – enabling the viewer to pick out minute details that are otherwise impossible to spot when visiting the Chapel – but their advice in the fields of history and art was invaluable. It now remains to be seen whether the format of the great permanent shows can also work in Rome – especially those related to art. But Balich is optimistic: “I believe that art can and should be spectacular – done with respect, of course”.