Peter Paul Rubens, world-known Flamish baroque painter, lived from 1577 to 1640 and spent the last five years of his life in the castle “Rubens Kasteel”. The estate has been under preservation order since 1948 and was labeled a cultural heritage. Now it is for sale for four million euros. Engel & Völkers Mechelen is marketing this exclusive, historical property. ﻿ 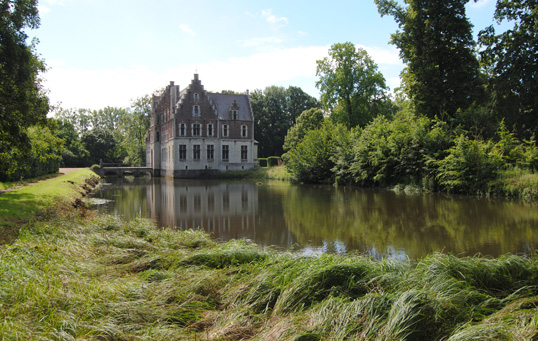 The castle was the first sandstone building in the area around the community Zemst and was therefore given the name Castle Het Steen. Different sources claim the name refers to the square stone tower that was part of the estate until the 18th century. Originally, the castle belonged to the regional knight of Wilre. Since 1396 the estate was in possession of the family de Taeye. During the 15th and 16th century, the castle was used as a military base and offered the ruling duke of Brabant the opportunity to reign the city Mechelen. In the course of the years, the castle was extended by a drawbridge, a tower, a trench as well as by further outdoor areas and meadows. With the moving in of Jan Cools, Lord of Corbais, the property was given a residential function in 1622. In the end, the renowned painter Paul Rubens bought the castle in 1635 and lived in it with his second wife Helena Fourment. He designed the estate in the Flamish renaissance style and had his emblem engraved on top of the fireplace in the living room. Since then the castle has been called Rubens Kasteel.

What it’s like to live in the castle “Rubens Kasteel”

“Rubens Kasteel” is in Elewijt, a village in the Belgian community Zemst in Flanders. The Belgian capital Brussels is about 27 kilometres northeast from the castle. The estate was restored gradually and all the typical elements of a castle were held. The exclusive object “Rubens Kasteel” is located on an eight hectare large park property. In addition to the main house, there are three more residential houses with a total living space of approx. 889 square meters and 33 rooms in total. The castle itself has two wings: While the right wing would be reserved to the lord of the castle, the left wing would be inhabited by the domestic servants. With more than seven bedrooms, five fireplace rooms, three offices and two kitchens one has many opportunities to evolve.

Peter Paul Rubens was the best known painter of his time and diplomat of the Spanish-Hapsburg crown. He was a versatile artist who painted numerous motifs from altar- and hunting pieces to mythological and ceiling frescos. In “Rubens Kasteel” he created some of his best known pieces and the castle itself was also part of some of his paintings. While Rubens was the castle’s resident, “﻿Consequences of War - 1638-1639﻿” and “Das Urteil des Paris - 1639“ as well as an image of the “Castle Het Steen” in the painting "A View of Het Steen in the Early Morning", probably 1636 Peter Paul Rubens, were created. Rubens’ masterpieces are still being sold for top prices these days.

Do you want to know more about the castle or are you even interested in buying it? Contact us - we are happy to transfer you to the right contact person.