Real estate and art – these two fields are more closely related than you might think at first. This is because both architecture and art are about fusing forms, colours and materials to create something that, in the end, is more than the sum of its parts. A creative exchange of the special kind now took place between the internationally renowned artist Chad “Chizzy” Mize and the real estate expert from Engel & Völkers Saint Petersburg, Florida. 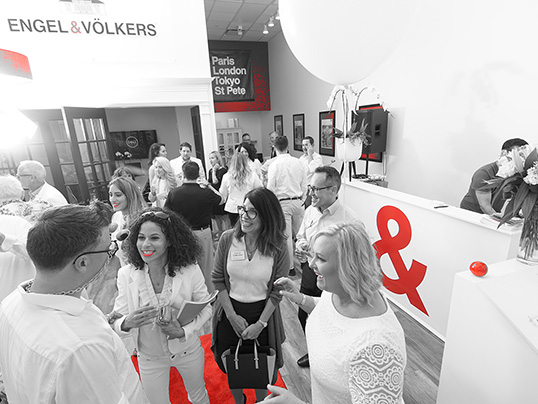 At a festive event on 21 February 2019, the well-known artist and painter unveiled a work of art in front of the 200 invited guests that he had made especially for the shop. The work is based on “Chizzy’s” new collection and can now be admired by all visitors and clients of the shop in “St. Pete”. Among the invited guests were personalities such as Peta Ianos, Senior Vice President, Brokerage Services at Engel & Völkers America, Oliver Tonn, co-owner of Engel & Völkers Florida, Linzee Werkmeister, Director, Public Relations & Franchise Support and Vicki Antonio, Senior Regional Vice President, Franchise Business Development. Various licence partners and colleagues from the three neighbouring Engel & Völkers shops in Belleair, Madeira Beach as well as South Tampa were also present. Of course, many clients, friends and family members of the shop’s employees attended the unveiling ceremony as well.

About the artist Chad “Chizzy” Mize

With his designs, artist Chad Mize expresses his unmistakeable love for past and contemporary culture, humorously and always with a slight twinkle in his eye. His works encompass playful scribbles, colourful patterns, political art and textual graphics. His contributions to the flourishing art scene in Saint Petersburg include, among others, works for the SHINE Mural Festival. This event is an art project where artists from around the world come together to brighten up the city with their murals. In addition, Chizzy is particularly well known for his legendary design “Paris – London – Tokyo – St. Pete”, which became a viral hit within the art scene. Other works by the artist are found in many private and corporate collections, both locally and abroad.

Chad Mize has been working under his artist’s name ”Chizzy” since 2005. What was initially intended as a humorous pseudonym has in the meantime become a well-known brand name for designer objects and T-shirts. Chad Mize had this to say about his alias: “I’ve always wanted to use a different name in order to realise my ideas and leave my mark on the world. It allows me to separate my characteristic art from my incidental and humorous works which I publish spontaneously for the sake of speaking my mind at a given moment.”