Engel & Völkers has brokered the designer’s former house in Santa Ponsa on Majorca for 2.45 million euros. The property was owned by the internationally renowned fashion designer Alexander McQueen between 2005 and 2010. It presides over unobstructable views of the Bay of Santa Ponsa and the Tramuntana Mountains. “The villa offers all the luxury comforts of a prestigious second home, in a desirable location on the Balearic island,” said Hans Lenz, Managing Director of Engel & Völkers Majorca Southwest. 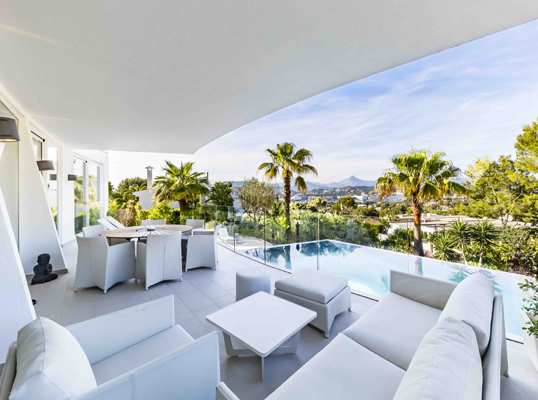 The interior of the property spans approximately 450 square metres, with five bedrooms and three bathrooms. The villa is fitted to a luxurious standard and was fully refurbished in 2015. Two large terraces, a swimming pool, a modern fitted kitchen and an underground garage with three parking spaces are all included in the sales price. The grounds are some 900 square metres large, located just minutes from the boutiques and restaurants on the famous marina of Port Adriano.

The British fashion designer Alexander McQueen rose to worldwide fame with his unique creations in the late 1990s and 2000s. He designed haute couture collections both for his own label and as chief designer of the French fashion house Givenchy. With fashion shows that expressed his creativity and unconventional career path, Alexander McQueen consistently managed to fascinate the industry. As one of the most influential couturiers of his era, he was named “British Designer of the Year” multiple times. Alexander McQueen died in London in 2010.