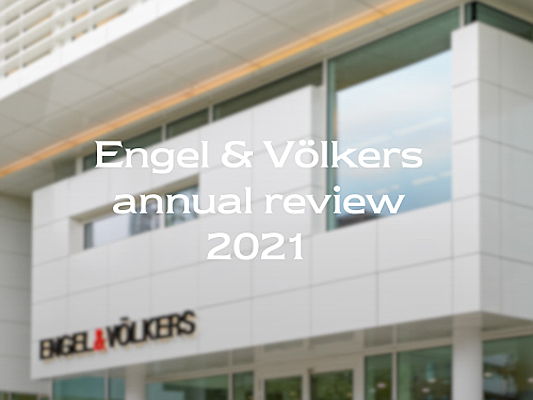 The Engel & Völkers Group increased its brokerage commission in 2021 by approximately 39 percent to 1.27 billion euros (2020: 937 million euros), marking the best-performing year in the company’s history. The company brokered real estate in the value of approximately 40 billion euros (2020: 27 billion euros), as it continued on its course of growth. “2021 was a record year for Engel & Völkers, thanks to the ongoing high demand for real estate and the consistent implementation of our business strategy. Our strong growth results from the excellent training of our agents to a high level of professionalism, our intensified activities in internationally sought-after first and second home markets as well as the continuous investment in our digital technology platform,” says Sven Odia, CEO of the Engel & Völkers Group.

Engel & Völkers Americas achieved the highest revenue growth in the Group’s Residential division, generating approximately 544 million euros (616 million US dollars) in brokerage commission. Thus, the 260+ shops and 5,000+ agents secured a 54 percent increase in revenues compared to the previous year. Engel & Völkers also continued to perform strongly in the DACH region, increasing revenues by 12 percent to approximately 310 million euros. Accordingly, Germany, Austria and Switzerland remain extremely attractive to private buyers and investors due to the stability of these markets. The temporary easing of travel restrictions and the return of international buyers during the summer meant that catch-up effects were also registered in second home locations. For example, Spain, Portugal and Andorra saw a 77 percent increase in revenues over the previous year, whilst Italy reported a 55 percent increase. France, the Netherlands and Belgium also grew their overall turnover by 26 percent. Revenues generated by the Market Center Dubai increased significantly by 119 percent in 2021.

Global demand for luxury real estate in particular remained high throughout last year. Between January and December 2021, Engel & Völkers recorded 97 percent more transactions in the segment between 5 and 10 million euros compared to the previous year. In the top-segment with sales prices in excess of 10 million euros, that increase was 90 percent. “The significant rise in international demand in the premium segment reflects the stability of the market. This is set to continue on a steady level this year,” says Sven Odia.

The Commercial division, with its segments specialised in residential, commercial and hotel investment as well as office, industrial and retail space rentals, generated a turnover of approximately 145 million euros in 2021, which marks a 25 percent increase in the approximately 120 offices worldwide (2020: 115 million euros).

Engel & Völkers is strongly positioned around the globe to continue its course of expansion in 2022: The Group’s proven business model, which consists of the well-established pillars of the franchise business, the Market Center concept, and company-owned operations, will be expanded further. The growing number of experts working around the world under the Engel & Völkers brand is reflective of the attractiveness of the company. In 2021, more than 70 new employees were hired at Hamburg headquarters alone, and more than 90 new shops opened worldwide. “In order to strengthen our global brand presence and international market expertise, we continue to hire strong personalities and empower them to write the next chapters of our success story with us,” Sven Odia emphasizes.

Contact us now
Engel & Völkers
Licence Partner Madrid Mirasierra/Puerta de Hierro
Thank you for your request. We will contact you shortly.