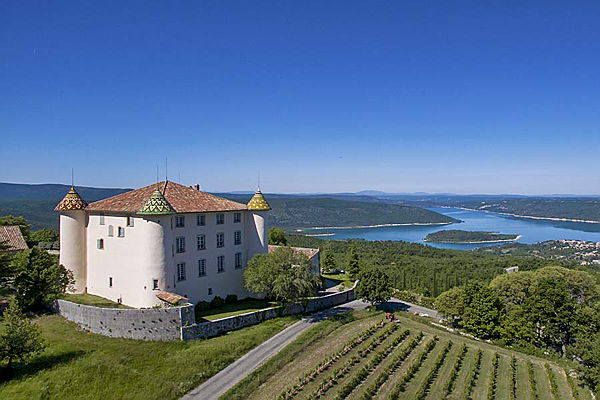 A stunning 3,300 square metre historic castle, overlooking the Sainte-Croix lake in the Var region, is currently on the market at Engel & Völkers Côte d’Azur.

We are looking forward to letting you discover this unique and fascinating residence, whose walls can testify to its centuries-long history.

The history of an atypical french castle


The exact year of the present castle’s construction is still unknown to this day, however in 1021 an oppidum (a Gallic fortification) was first built at its location. Thereafter, it became a fortified Roman town known as the Castrum de Aquina.

In the 13th century, a fortified ‘bastide’ was erected, which was later converted to a noble house at the end of the 16th century.
The famous Sabran family, very prominent in the region of Provence, decided to expand the house by building a mansion.

In 1606, under Henri IV, Balthazar de Gauthier, son of a Sabran son-in-law, rebuilt the estate. The construction work lasted until 1641 and resulted in a beautiful four-turret castle, with a renowned architectural style for that time. Balthazar de Gauthier’s role in the history of the estate didn’t stop there. He undertook a further expansion of the property on the land of an older structure (belonging to the “Baux” and then the “Blacas”).

The entrance gate, adorned with fruits and foliage still visible to this day, is a typical example of 17th century style.

Over the years, important renovation works have helped maintain the state of the castle. Between 1720 and 1770, the former landlords of the property completed several renovations. For instance, the gardens and terraces were redeveloped in 1732, along with the fountains in 1770.

An exceptional french castle with an outstanding view


Nowadays, the perfectly maintained castle stands in 20-hectares of grounds with gardens, parks, vineyards and fountains.
The property is only 20 minutes away from Saint-Tropez and Cannes, thanks to its private heliport. This unique estate offers an outstanding view of the Sainte-Croix lake, in an ideal and quiet setting.

Designed in the 17th century, its terraced gardens give access to a stunning and modern swimming-pool.

The peculiar architectural aspects of the castle are a reminder of the Middle Ages, but the numerous renovation works and refurbishments that have occurred over the years have made it a luxurious, elegant and comfortable home. According to the local legend, the drawings and colours of the turrets roofs represent the four seasons.

The interior of the castle is particularly elegant and authentic, featuring several elements that are classified as Monuments Historiques. Some extraordinary pieces can be found, such as the forged iron staircase railings, climbing up four floors uninterrupted, and the dining room with golden plasterwork.

You can find this exceptional property, offering a unique quality of life, on the Engel & Völkers Côte d’Azur website.

Read also : Is buying a castle in France a good investment?