Living in Century Tower 1 & 2 in Mid-Levels

Century Tower is a modern development located in Mid-Levels Central. It consists of two towers built at separate times but external renovation to the entire development was done in 2012. Tower 1 is a modern high rise block completed by Kerry Properties in 1992. It consists of 22 storeys with only 1 spacious apartment of 2848 sq ft saleable area per floor. They all have 4 bedrooms and a large entertaining area facing East to the Peak Tram. Tower 2 is a prominent round 31 storey tower in Central Mid Levels which was completed in 1971 and consists of 48 apartments & 2 duplex penthouses. The original developer was Hong Kong Land Company. All the apartments have large balconies and open green and harbour views. The regular apartment size is 2041 sq.ft. saleable area and the penthouses are 4172 sf saleable area. Most apartments are now well renovated. A beautiful four bedroom three bathroom apartment. Very spacious rooms throughout, all bedrooms have built-in wardrobes. Located in a good family complex with facilities.

The Century Towers are located next to the "Peak Tram” railway at the start of the winding Tregunter Path situated at the top of the Mid-Levels and nearing the Peak. Consisting of two Towers, Tower one is the older circular building, built in 1971, while the more sought after Tower Two is built in 1992. Despite the older looking facade, the towers are quite exclusive, famous for its great space efficiency, location and spectacular post-card like views overlooking Hong Kong and the Peak Tramway. The facilities of the Century Towers include carpark levels, an outdoor swimming pool with changing rooms and a gymnasium.

Tower One has 31 floors with residences starting from the second floor to the penthouse level, each storey has two apartment units consisting of approximately 2,565 gross square feet and a large balcony. The layouts of the units in Tower One consists of two single bedrooms and master bedroom with ensuite, in total there are four bathrooms per unit, also including maid's quarters attaching to a utility room and it's own bathroom.

The more favourable Tower Two has 21 storeys with the added privacy of one apartment per floor. Each unit in Tower Two are around 3,663 gross square feet, original layouts are two bedrooms and one master bedroom all with ensuites. In total there are 4 bathrooms, also including a study, utility room and maid's quarters. The apartments in the Century Towers are very high in space efficiency with an average efficiency ratio of over 80 percent. Recreational facilities, including gym, outdoor swimming pool, children’s pool and children’s playground.

The Peak and the primary Central business district are this residential areas called the 'Mid-Levels Central'. It is very popular with the locals and expats alike due to its convenience, stunning city and harbour views and the availability of a large variety of apartments.

One of the city’s most prestigious locations and a long-time favourite with expats, Hong Kong’s Mid-Levels puts you midway between Victoria Peak with its appealing cool and pretty scenery, and the hustle and bustle of downtown Central. Relatively quiet, with small neighbourhood parks, easy transport links into town and larger accommodation, Mid-Levels is often the ideal choice for families.

Situated at the junction of May Road and Tregunter Path in the luxury residential area of Lower Peak and with convenient access to the city. There is a residents’ shuttle bus to Central and also plentiful taxis. 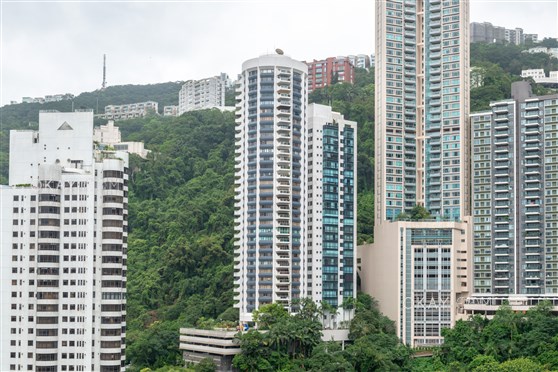