Living in Chung Hom Kok in South Side

Hong Kong’s south side is renowned for it’s beautiful beaches, relaxed pace of life, magnificent views and some of the world’s most expensive and eye-watering real estate. Suburbs such as Repulse Bay, Stanley, Deep Water Bay and Shouson Hill are considered the cream of Hong Kong with tycoon’s mansions sitting along side apartment towers designed by world famous architects, most people can only dream about finding their perfect home here. One of the lesser known and much quieter areas however on this side of the Island is Chung Hom Kok.

Located on a peninsula midway between Repulse Bay and Stanley, Chung Hom Kok is a smaller, low-density neighbourhood offering mainly townhouses and luxury low-rise apartments. Promising a relaxing, enjoyable atmosphere, most of the homes feature spectacular views of Stanley to the East or West above Chung Hom Kok Beach to Lamma Island.

Chung Hom Kok is less crowded than Stanley and offers it’s residents a low key beach lifestyle with privacy and exclusivity. The beach is small but beautiful.  It’s tucked away off the road, hidden by trees and down some stairs, making it a lot quieter than other beaches in the area due to not too many people knowing of it’s existence outside of the locals residents. Ample and cleverley designed barbecue pits make this a great place for a cookout at sunset with friends and family. It’s worth keeping in mind however that whatever you bring you will need to carry up and down the stairs to the beach. There are shark nets and life guard services during the summer months and very clean and well kept toilet and shower facilities. There is an attractive playground for children and a kiosk selling drinks and light snacks.

Most of the residences in Chung Hom Kok have incredible sea views and private outdoor areas. Apartments are situated in low-rise buildings which conform to the areas very strict height restrictions in the building codes. Designed for families, the houses, townhouses and apartments are spacious with plenty of light and room to move starting with a minimum of 3 bedrooms and go up to several bedrooms plus maid’s quarters. Most have a large outdoor space with gardens, terraces and private swimming pools. There is a mixture of the older colonial style buildings and the more modern buildings. Many of the colonial buildings have been superbly renovated to transform them into ultra luxury state of the art residences. Chung Hom Kok’s properties usually come with higher price tags than those in Stanley, with increased privacy attracting an additional premium.

The Hong Kong International School (HKIS) primary and secondary school campuses are nearby - in Repulse Bay and Tai Tam respectively. HKIS follows the American curriculum. There are many international kindergartens in nearby districts, and Montessori Nursery has one of its branches in Stanley.

What’s In The Neighbourhood

Chung Hom Kok has a dry-cleaning facility, doctors’ surgery and supermarket, but most residents prefer to shop in Stanley Village, where there is a large plaza with numerous shops, cafés, well stocked supermarkets catering to western tastes with imported products, banking facilities, restaurants, bars, medical and veterinary clinics, postal services and much more. Stanley is well known for its clothing and souvenir market, as well as its seaside dining. There are also two separate beaches in Stanley that attract large crowds during the summer months. Stanley is where the famous Dragon Boat races are held each year amongst other entertainment events, and you can hire wave boards and other sea sport equipment at the beaches.

The commuting time to Central varies between 30 and 45 minutes depending on traffic and time of the day. Commuting to Stanley takes just 5 minutes. Many buses including City bus no. 6, NFW bus no. 973 plus minibuses will go through Chung Hom Kok from Stanley on route to Central, although most people that live in Chung Hom Kok would have a car. Taxis are plentiful enough. 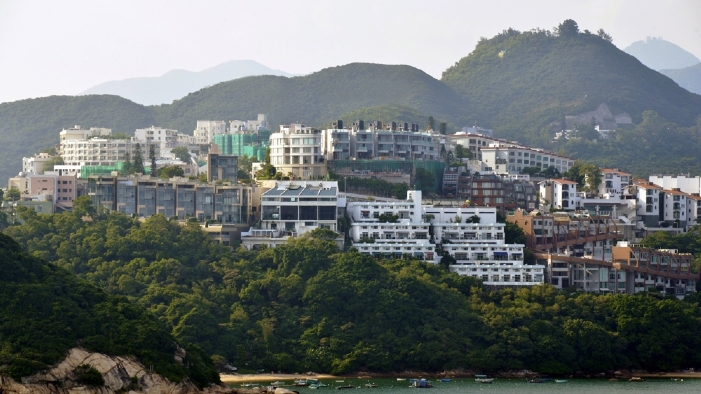