Getting Around Hong Kong on the MTR

Getting around Hong Kong is efficient and effective with the MTR. Wherever you need to get to, there is an MTR station close by. The first line opened in 1979 and the network has been expanding ever since. The MTR consistently achieves a 99.9% on-time ratio. With colour coded lines stretching across Hong Kong it’s simple to work out and makes commuting a breeze.

One of the earliest lines is the Island Line also known as the Blue line. Government approvals were granted for construction of the Island line in December 1980. By early 1985, the Island Line was opened with service between Admiralty station and Chai Wan station. Both Admiralty and Central stations became interchange stations with the Tsuen Wan line. In 1986, the Island line was extended to Sheung Wan station. In 2017 the Blue line extended from Central to Kennedy Town and a new green line spin off to take care of Ocean Park, Aberdeen to South Horizons was added.

Suburbs on the Blue Line have always been popular residential areas for many years before the MTR came to light. The fact that they became joined by the network of the MTR only made their popularity as good suburbs to live even more sought after. Property prices increased and areas that were previously less accessible became highly desirable for both commercial and residential purposes.

Starting at Kennedy Town, HKU and Sai Ying Pun, these districts have experienced incredible growth over the past few years with developers seizing on the convenience factor of the MTR system to create and redevelop high rise apartments and commercial space. Retail, commercial and entertainment spaces have more than doubled and restaurant and entertainment business have moved in. Sai Ying Pun is an excellent example of how to turn a more bohemian styled suburb into a gentrified neighborhood attracting professional residents and top restaurants and businesses to the area.

Sheung Wan has always been a commercial district with a smattering of residential buildings scattered amongst the dried food shops and tea merchants. As a close inner city district, being on the MTR has given much benefit to the more creative businesses that have opened their doors and offices seeking more space and lesser rents than in the Central district, yet a stone’ throw or only one stop to Central. Like SYP, Sheung Wan has become a hotbed for cool restaurants and clubs with residential development increasing with high end apartments and resort style facilities whilst still managing to keep an old world Hong Kong look and feel.

On the other side of Central is Admiralty with it’s commercial office towers and the hugely popular shopping and hotel mecca of Pacific Place. This complex has commercial offices in abundance including the district courts and is home to the Island Shangri-La, Conrad, Marriott and Upper House Hotels. The shopping mall has both international and local designer shops mostly at the high end of the scale, and a diverse selection of restaurants. It also houses the AMG Cinema complex.

Next stop Wanchai which is a diverse and vibrant inner city suburb from Govt. offices and businesses, restaurants, night entertainment, bars, sports stadiums, to high end residential towers and conversions. There are some very expensive apartments on the hill side of Wanchai, with quaint old town cafes and cute retail shops, galleries and showrooms all jumbled in together. On the harbor side are the all night clubs so popular with tourists.

Causeway Bay is a concentrated mass of people during the day, famous as a mecca of shopping with  it’s Time Square and Sogo department store, has pretty much every brand you’ve ever heard of and plenty more. Victoria Secret opened their mega store last year, and high end designer shoes, watches and bags abound. This is a robust noisy suburb on steroids with apartment buildings scattered amongst the retail and commercial spaces. Causeway Bay is always busy with a number of hotels, big restaurant selection, rooftop bars and entertainment outlets. Double and triple glazing keeps it quiet for the residents and yet not too far off there are some very interesting and peaceful residential enclaves with a village atmosphere.

Tin Hau is one of those lovely quiet residential neighbourhoods, where you will find a lot more space for less, and with luck get a rooftop terrace. Narrow streets filled with quaint cafes and restaurants, this area is a really good choice if looking for a residential village atmosphere. Being so close on the Blue Line to Causeway Bay , North Point and Quarry Bay which have become favored hotspots catering to the creative industries of advertising, IT and more,  Tin Hau offers these creative types a little more old conversion and ex warehouse living, higher ceilings and open plan.

The Eastern district from Tai Koo, Sai Wan to Shau Kei Wan, Heng Fa Chuen to Chai Wan you will find quieter local suburbs, with plenty of bakeries, shopping malls, and new developments. Some residential towers in this eastern corner have incredible views from waterfront locations. Sai Wan Ho is primarily residential. The hill was once filled with squatter settlements, now replaced with new residential buildings. Heng Fa Chen is a residential development with 48 residential towers and home to the Paradise shopping centre. It is also the only station on the Blue line that is at ground level. Chai Wan is built on land reclaimed from the bay and is a mix of residential towers and industrial operations. 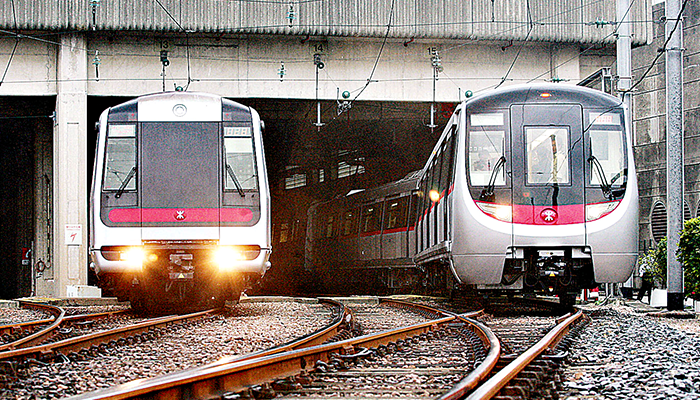