Lamma - Away From The Maddening Crowd

Hong Kong has some very special places that seem worlds away from the hustle and bustle of the busy city streets. To find a place with no traffic noise, no cars, no highways, no flashing neon sky signs and no crowds, yet still have enough variety and amenities and be an easy ferry commute away from Central, look no further than Lamma Island.

In these challenging times for Hong Kong, it’s comforting to know that there are places that will always feel safe and be far enough away to hold on to the idyllic lifestyle that those residents who live here hold so dear. Lamma in Chinese means "the southern tree branch" and Lamma Island was originally known as "Bok Liu Chau".

This is a village Island. To be precise Lamma Island is made up of a number of small fishing villages with seafood restaurants lining the ferry piers and marinas. Step into a world of tropical fruit trees growing in the gardens of small village houses nestled between jungled slopes, winding hilly paths and isolated beaches. Bonus: It’s just 30 minutes away from the center of town, and also where martial arts star Chow Yun Fat of Crouching Tiger Hidden Dragon fame grew up.

Lamma is situated only 3km off the south west coast of Hong Kong Island from which it is separated by the East Lamma Channel. The island is Hong Kong's third largest being about 6km in length and quite narrow being about 2.5kms at its widest point. Apart from a large power station built in 1972 on the western side of the island which supplies energy to Hong Kong Island, and a recent solitary wind turbine the island is virtually unspoiled and something of a contrast to its outlying island neighbours Cheung Chau and Peng Chau which have had a lot more development take place.

Lamma has a population of around 5,000 of which the vast majority live in the two main villages, Yung Shue Wan and Sok Kwu Wan both of which have a regular ferry service to and from Central and Aberdeen. The island is very rural with some rugged scenery with granite hills dominated by the 353 metre peak of Mount Stenhouse (Shan Tei Tong) in the south, as well as tiny settlements and quiet beaches. As with its neighbouring islands there are no cars, just bicycles, motorised carts and miniature emergency vehicles.

Lamma has a very “relaxed” feel to it with a slow pace of life which has made it popular with people looking for an alternative and layed back type of lifestyle. There are many western ex-pats in the community, some of whom have lived here since the sixties/early seventies being the time of hippies and plenty of tie dye. Today it is popular with families, offering a safe haven and freedom for children to have more space and keep pets. The island is well known for its seafood restaurants which are popular with locals and visitors all year round as you choose your fish or shellfish and have it cooked fresh just for you. Both ferry piers can be busy during the weekends with visitors coming for lunch.

Yung Shu Wan being the larger village, offers everything residents need. The narrow main streets offer many different types of restaurants and bars, small boutique hotels and plenty of shopping. Well stocked supermarkets, hardware and electronics stores, cafes, nail bars, fashion and boutique craft stores, veterinary and medical services, make living here hassle free and easy with good amenities. The beaches however are really what makes living on an Island so worth the commute. The larger and most popular all have shark nets and full time surf patrol and life guards during the long summer months.

Families love that they can rent or buy an entire village house which have between 3 and 4 bedrooms and often have been completely renovated with open plan large living spaces. For smaller families or singles/couples, some of the houses have been separated into two independent dwellings. Many of the properties take in spectacular views either elevated on the hillside or taking a beachfront position.

So Kwu Wan on the opposite side of the island is a very small fishing village with one main street that mostly houses a few seafood restaurants - the most famous being the Rainbow Restaurant, hugely popular with visitors and operating their own ferry to pick up and drop off diners, along with a handful of local stores selling a few basic food items or equipment.  There are a small number of houses in this tiny village, and then the path through the village will take you to other little settlements that might have 4 or 5 village houses in a cluster dotted amongst the hillside.

For residents here, especially for expats who prefer western style cooking and groceries, you will need to shop before getting on the ferry to So Kwu Wan. This at times can be a deciding point for potential residents, who may not wish to face carting groceries and supplies to the outer village clusters in the humid heat or wet months. But for those who do, the peace and tranquility, the privacy and freedom more than make up for any inconvenience.

Having one of the most beautiful smaller beaches of Hong Kong, take an easy walk through the ancient gardens, past the Kamikaze Cave where Japanese forces used to launch suicide missions during WW2, to reach Lo So Shing beach. Here you will find perfect white sand, shark nets and floating pontoons, as well as the surf clubs lifeguards. There is one small shop, so mostly you will need to bring your own food and drinks from the village. Never busy, there are a few trees for shade and modern clean showers, toilets and changing room facilities.

There is a path or hiking trail that connects both So Kwu Wan and Yung Shu Wan, which takes about 50 minutes to walk.  This family friendly hike passes through a number of quaint older villages and historical landmarks. As you ascend to some of the highpoints of the Island you will experience some spectacular views of the landscape and out to sea. 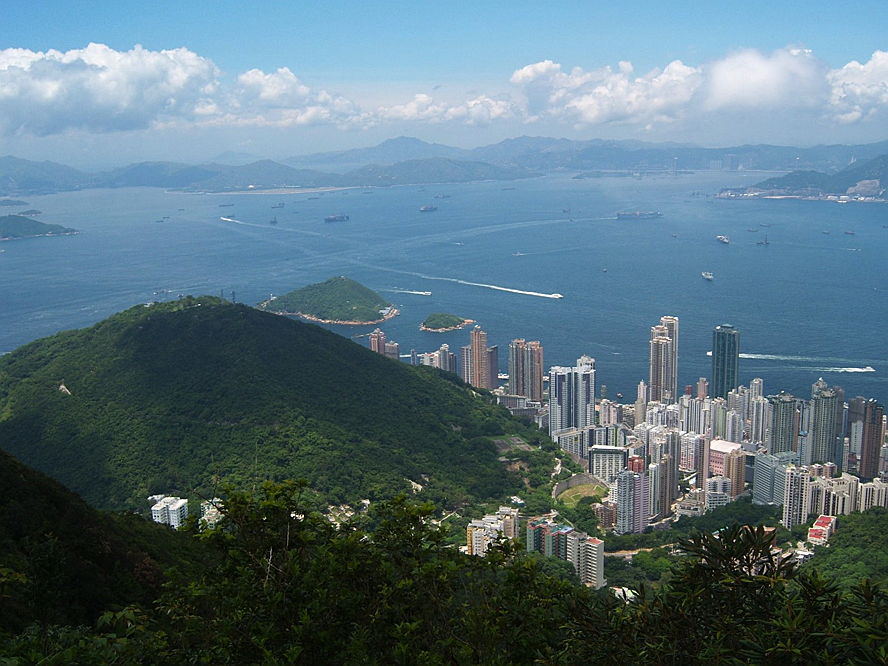