Hollywood Road was the second road to be built after the colony of Hong Kong was founded. It was completed in 1844, which was a long time before the birth of the more famous Hollywood area of California was ever settled. Hong Kong’s Road actually got it’s name from the holly bushes that grew prolifically in the area.  The first road to be built in Hong Kong was one year earlier being Queen’s Road Central.

Today Hollywood Road follows the same original path, snaking it’s way downhill to Queens Road, Sheung Wan, with a maze of steps, laneways and alleys, running off the main street. Architecturally there is a fascinating mix of historic and modern buildings blending in with each other from old shopfronts to ultra luxury high rise residential apartments such as Centrestage, popular with ex pat professionals and Two Two Six Hollywood, with it’s luxurious interiors.

Hollywood Road has become a busy, dynamic and flourishing area known well as a shopping street for art and antiquities, where you can find everything from a Ming Dynasty vase to artworks from some of China’s hottest new and established artists. Once being a neighbourhood for opium houses, gambling dens and brothels this street is now lined with fashion forward concept stores, and restaurants. It has become a hot dining area with casual drop in places like Classified for a coffee or brunch, vegan dining such as Grassroots Pantry to some of the most exclusive restaurants with secret doors like Bibo with their incredible food and prized art collection.

One of Hong Kongs most famous and revered landmarks sits on Hollywood Road - the Man Mo Temple. Built in 1847, this exquisitely beautiful Buddhist temple is popular with both locals and visitors who come to experience the peace and solitude. It is a tranquillity which is felt all the more keenly as it contrasts so much with the bustling downtown area of Central, just a few minutes’ walk away. The Temple is named after its two principal deities: Man, the god of literature, who is dressed in red and holds a calligraphy brush; and Mo, the god of war, often depicted in a green robe and holding a sword.

One of the more surprising aspects that stands out for visitors who wander down this famous street are several old Chinese coffin shops, euphemistically referred to as ‘Heavenly Longevity shops’ by the Chinese, characterized by the lustrous stacks of lotus-shaped timber coffins on display. There are only five coffin shops left today along and just behind Hollywood Road but there used to be a great deal more. Set up originally near to the Tung Wah hospital for Chinese people, to handle the number of deaths from a deadly bubonic plague that ravaged the area around the turn of the 20th century.

The Former Central Police Station and Victoria Prison compound at 10 Hollywood Road, was built in phases between 1841 and 1925, comprising a number of historic colonial buildings which housed the Police force, the Magistrates House and Victoria Prison. Considering so much of Hong Kong’s colonial past had been bulldozed since the early ‘70’s by developers to make room for sky scrapers and residential towers, this has been a much anticipated project for Hong Kong.  The complex has been painstaking restored and developed over many years to not only preserve this historical site and buildings, but to integrate it with ultra modern architecture  in order to present live performing arts spaces and galleries. Opening in May 2018 as a major Heritage and Arts Centre the site was renamed Tai Kwun which is the original colloquial name for the site. A number of retail shops, restaurants, bars and clubs complete the transformation along with sitting areas, guided tours, info stations and a central courtyard. 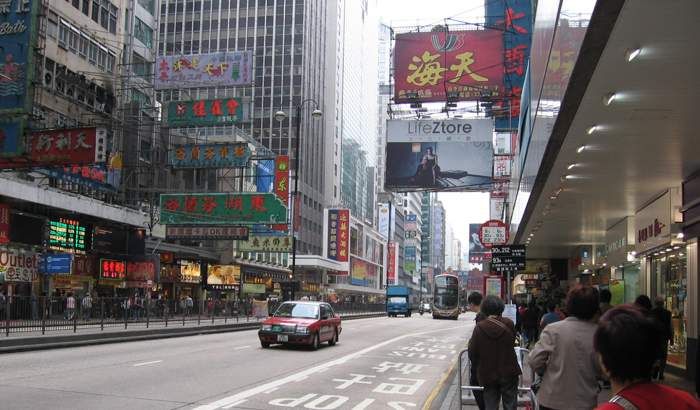