Things To Know When Purchasing Village Houses in Hong Kong

When it comes to housing, Hong Kong is known for its high-rise buildings. Yet, there is a small percentage of housing that is dedicated to another much smaller typology: The village house in the New Territories. This typology is mainly defined by two major parameters. Height and footprint. The results of these simple rules are conventional 2100 sq ft boxes that in most cases are constructed over three levels of 700 sq ft using reinforced concrete and finished with generic ceramic façade tiles.

The traditional design in the past has been cookie cutter with a few exceptions. Small windows, a number of small rooms within the 700 sq m space of each level and sometimes a rooftop area utilized.

Due to the high density population in Hong Kong, peace and privacy are often considered as a form of luxury in the city. If you wish to have a large living space without spending a fortune, it is worth considering a village house. Although there are numerous regulations and complicated procedures that come with buying village houses, it is well worth the exercise using an experienced agent and a legal firm who specialize in this type of property law.

A few things to be mindful are:

Before buying a village house, prospective buyers should always have the vendors show their proof of ownership, which should entail the official or certified copy of the Government Lease. The vendor should either be the lessee of the land on which the Village House is built or be the grantee under a New Grant, or the assignee or successor in title of the lessee grantee. Moreover, the vendor should also be registered with this title in the relevant NT Land Registry under the Land Registration Ordinance.

Other than checking the proof of ownership, prospective buyers should also research extensively on the rights of occupation of land. Village houses tend to be located in the New Territories and the rights of occupation of land is usually complicated in this district than Hong Kong Island – for example, certain pieces of land can be resold, but some are forbidden from reselling. To avoid the phenomenon of having rights to the house but not the land, please ask the vendor for the provisions of the building license.

There are four types of village houses, including those regulated by the Small House Policy, such as ding uk, which is a type of village house. However, a village house is not necessarily a ding uk. First, there are those that are built on land granted by the former Village Block Crown Lease, now called Block Government Lease, in 1905. These types of houses are usually found in older villages. Once approved by the Lands Department, this type of village house could be torn down and rebuilt, without incurring land premium payment. Second, there are those built on lots auctioned by former District Offices, now the Lands Department, after 1905. This type of housing was confined to two storeys. It is likely that records of the land leases granted during that period were destroyed or lost during the second world war. Therefore, the saleability of houses built on land granted during the prewar period might be affected. The third type are those found within the New Grant Lot, with each lot granted on an individual basis according to the Small House Policy enacted in 1972. The grantee, such as an indigenous villager, must have sought written consent from the district lands officer before he could sell it. Finally, there are those built on private farmland within an existing landowner’s old schedule lot. In order to sell this type of housing, the owner must have obtained a Certificate of Compliance.

By loose definition, village houses can be classified as the most typical ding uk, or those regulated by the Small House Policy enacted in 1972, located within the New Grant Lot, and those rebuilt from older village houses on land granted by the former Village Block Crown Lease, now known as Block Government Lease, in 1905. A typical ding uk, governed by the Small House Policy, is confined to three storeys and has a maximum saleable floor area of 700 sq ft. The owner of a ding uk, [such as] an indigenous villager, would have to pay a land premium to the government for the house to be marketed privately. Having said that, the title to a village house, and the ownership of the lot it is built on, is often more complex than a typical flat in a multi-storey building or residential complex. So, it usually takes longer for a bank (or the valuer) to carry out due diligence on the title, permitted uses, legality of construction, encumbrances and easements before approving a loan and determining how much the bank is willing to lend. 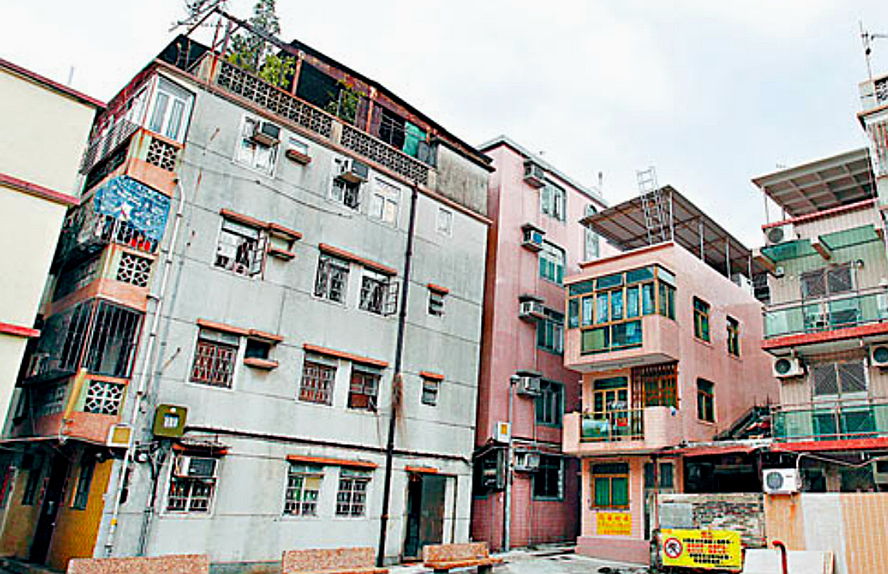