Living in Shek O on the DÁguilar Peninsular

Hong Kong has any number of quaint and local small seaside villages. Most have bright painted buildings, seafront restaurants serving up deliciously fresh seafood, tourist day trippers, local handcrafts and nik-naks, temples, nature walks and so on.  Few match the popular and sought after village of Shek O.

This small town sits on the DÁguilar Peninsular on the south side of Hong Kong Island. From here there is a reasonable length commute to any business district. Shek O Road which connects to Tai Tam Road is the only road in and out from the reservoir junction and is a narrow two lane winding road, often packed with cyclists or buses to slow you down. On the weekends, especially in the summer months or public holidays, people flock to the beach, and the access can get maddeningly clogged with traffic. When it’s time to leave, taxis become a scarcity, or come at a premium, usually Uber won’t come this far to pick you up so you have to fight off the departing beach crowd for a taxi or stand in the long lines in the heat without shelter for the bus or mini bus service.

So what makes this small village so special and hugely popular with ex pat families? Why have so many people decided to make this small and at times inconvenient village home?

The views on the way in, across the DÁguilar ridge before you even arrive at Shek O are nothing short of spectacular, but once you get a glimpse of the headland of Shek O peninsula you will be sold. There are two beaches, the main and larger Shek O beach on the south side and the smaller Back beach on the north side. Both beaches have fine golden sand, and at Shek O main beach there are waves. Whether you live at Shek O beach, in the Village or Big Wave Bay, this is a true and heavenly beachside neighbourhood with incredible rock formations, cliffs, and thick vegetation, unspoilt by over development and absolutely no high rise.

On the hillside that wraps around the beach you will find discreet mansions, blending in with nature and so scattered that you hardly notice them. The village itself has a couple of roads and that’s it. The village of Shek O is traditionally arranged in a hickledy pickledy random mass of cute walkways and paths running between the houses.  Mostly the houses of the village are of single and double stories with a rooftop generally utilised to take advantage of any views. There is a road that runs beyond the main beach climbing to a cliff top that has the newest traces of development with a few low to medium sized apartment blocks perched on the side with panoramic views out over the sea, and the postcard beautiful Shek O beach.

Shek O started out as a small fishing village around 200 years ago. The original inhabitants were mostly Hakka and Punti fishermen, who migrated here from northern mainland China. The main village family names  were Chan, Yip, Li and Lau. The area was once famous for Lobster catches, and the fishermen were able to build their small houses of which a few are still standing today. Due to the long and arduous drive the area really didn’t become popular as a beach destination until around the 1940’s where it was developed into a famous sea bathing resort that attracted celebrities and wealthy families. Many of the local fishermen supplemented their incomes by hiring out beach tents and umbrellas, and selling towels, supplies and food to the day trippers. This is a practice that continues today, with the hiring of bright beach umbrellas and deck chairs.

What to do in Shek O

These days, the village has a resident population of around 3000, made up of mostly families and couples from local and countries around the globe. Once they discover this small pocket of paradise, most never want to live anywhere else. This in itself makes for tightly held properties, and good rental properties are always in high demand. Land lords often have long waiting lists of people wanting to move here, and the residents themselves like to refer friends and families if a place becomes available.

There are a couple of beachfront restaurants and numerous stalls offering delicious food, and a definite draw to Shek O for day trippers is the famous Thai restaurant located on the main road at the village roundabout. A popular activity is hiking the famous and nearby Dragon Back trail with world class views of the headlands or hand gliding off the cliffs behind and landing on the beach to finish off with a spicy pad thai, a swim at the beach to cool down and a pint at Ben”s back beach bar before heading home. For the local residents, they get to appreciate the many and varied restaurants and few bars all to themselves once the sun goes down or they fire up the BBQ and have friends around.  In the shorter winter months when the tourists and day trippers don’t come the village settles into a peaceful haven that really is away from it all.

Having such a tight-knit resident community living here, the neighbourhood is both familiar and friendly. Local and ex-pats alike live side by side.  This too makes the area very safe for children. The resident children are able to enjoy an amount of freedom not possible in the cities and larger suburbs. Every family seems to have a pet dog or two and dogs are allowed and encouraged to swim at Back beach.  During the swimming season the main Shek O beach has shark nets laid out making it very safe to swim and full time life guards are on duty. For western families, the houses in the village will give you more space to spread out and relax. For the lucky few who manage to snag an apartment overlooking the ocean and beach, life probably couldn’t get much better.

Commuting might not be the best feature of Shek O, however, there are regular buses and taxis, and the trip will take you around 30-60 minutes to Central depending on the time of day you travel, but this seems to be a very small price to pay, when you consider the wonderful and very laid back beachy lifestyle that is on offer in this southern area of Hong Kong Island.  Not only are the beaches wonderful and about as close to an Australian beach as you will find in Hong Kong, you have the conservation parklands surrounding you, with so much vegetation to filter the air.

The Shek O Memebers Golf and Country Club located on the way into the village has some of the most expansive spectacular views you can imagine whilst playing a round on the course.  The Club has the mandatory dress code regulations, but otherwise, Shek O has a compulsory dress code of shorts and flip-flops, all year round, and don’t forget the sunscreen. 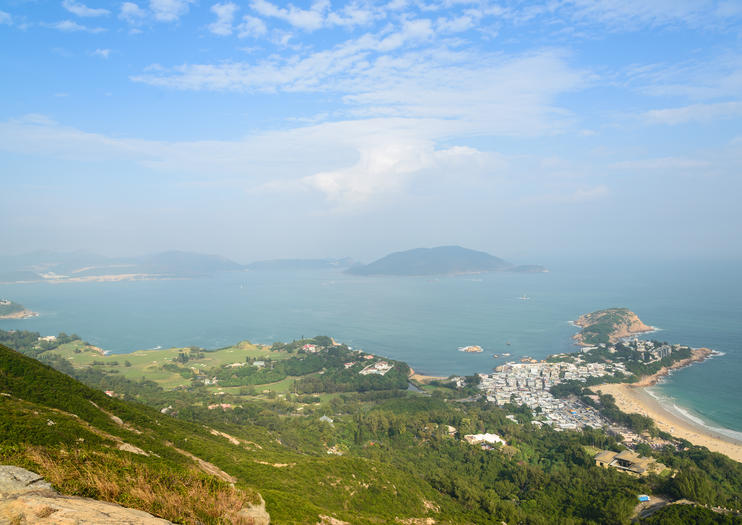