The South side of Hong Kong Island is often referred to as the domain of ex pat families, and with very good reason. This is due to a few factors such as the requirements for much larger homes, more space, being near to international schools, a quieter place for children, good amenities, best beaches and so on. Shouson Hill is a centre piece of this exclusive area, located just above the coastline of Deep Water Bay and east of Wong Chuck Hang.

The hill is named after Chow Shouson who was born in the walled village of Wong Chuk Hang Valley which was a cultivated area. He became a senior official in the Qing Dynasty before the 1911 Revolution and following on he became a politician in Hong Kong. In the early 20th century the British military used the hill to bunker troops and as a sentry post overlooking Deep Water Bay, Aberdeen and the area now occupied by Ocean Park. The area has quite a rich history particularly during the Japanese invasion and occupation where you will still find gunning placements and bunker ruins.

Today, Shouson Hill has become one of the most expensive suburbs of Hong Kong. Like the Peak, it has become a favourite of Hong Kong Tycoons due to it’s location and prestigious reputation. The location presents rather narrow and winding roads running throughout the hillside, and with much less traffic flowing through, the neighbourhood takes on a very peaceful and laid back ambience. Some of the views are spectacular and panoramic of the lush green hillside and mountains over Deep Water Bay and the sea beyond. The majority of people who live here are families rather than singles or couples.

Dotted amongst the green vegetation are a number of large mansions and homes owned by Hong Kong’s rich and famous.  There are times where it is possible to rent one of these magnificent homes, however for most potential residents there are also low rise townhouse and apartment buildings suitable for families that have large three, four and five+ bedrooms that can be bought or leased.

The developers have applied particularly high standards to their developments within this area, with ultra modern architecture and state of the art fit-outs providing beautifully landscaped gardens and resort style swimming pools for their low rise apartments and town house complex’s. Some will offer extensive facilities such as a fitness gym and multiple play areas for children. The first developed buildings from the seventies to nineties period are generally very well kept and maintained, with some having had major renovations carried out on site to bring them up to current modern standards and facilities. These are definitely worth looking at as many of the individual apartments too have been thoroughly renovated and updated and they can be a little less expensive than the newer properties.

In the area, there is a small Park’n’shop supermarket and a few garden nurseries. Residents may also use the nearby Parkview shopping centre or it’s a very close commute down to Repulse Bay or Stanley for more comprehensive shopping, restaurants and entertainment. Aberdeen too is a short commute as is Ap Lei Chau, so being so central to all of these larger and more commercial suburbs and yet residing in such a quiet enclave is one of the most appealing aspects of living in Shouson Hill.

The more popular leisure attractions in and around Shouson Hill, of course, are the beaches. There are beaches in Deep Water Bay, Repulse Bay, Middle Bay and South Bay, all of which have shark nets out in the summer months, with several others just a little way along the coast in Stanley. There’s also Middle Island for those who become members of the Hong Kong Yacht Club. Other private clubs not far from Shouson Hill include the Aberdeen Boat Club and Aberdeen Marina Club, two of the city’s leading havens for sailing lovers in the town where many of the city’s yachts are berthed.  A short commute will take you to The Hong Kong Country Club, The American Club Hong Kong, the private Hong Kong Cricket Club and the public Hong Kong Tennis Centre. Other sports and leisure facilities are available at The Repulse Bay, and close by there is Parkview, both of which non-residents can join for a monthly fee.

Hiking too is such a popular activity and Shouson Hill is surrounded by national park with some of the best hiking trails on your doorstep. The Parkview to Tai Tam family walk which takes you through the famous heritage waterworks and reservoirs of the park lands is a comfortable and mostly downhill hike all the way.

The international schools have quite a presence on the south side of Hong Kong. The Hong Kong International School has its High School and Middle School nearby on the border of Redhill and Tai Tam, and its Primary School is in the heart of Repulse Bay. Not too far away in Wong Chuk Hang is the highly regarded Canadian International School, while just a little further afield in Aberdeen is South Island School, a secondary school operated by Hong Kong’s English-medium, international-standard, subsidised-but-still-expensive English Schools Foundation. There are also several schools for younger children in Repulse Bay, including Southside Kindergarten and The Woodland Montessori Pre-School Repulse Bay.

There are definite advantages to having a car when living in Shouson Hill. It’s not essential, however being such a hilly district, and due to most residents being families, with school drop off and pick-ups,  it’s quite the norm to own a car. All dwellings in this suburb come with parking as a standard arrangement. For those who can afford it, a driver is a great idea too especially if your place of work commute takes you to Central or Wanchai where parking stations can be expensive.  The journey into the CBD takes around 15 to 20 minute depending on the time of day travelling. The closest MTR station is the recently opened nearby Ocean Park station which is a reasonably short and very walkable distance. 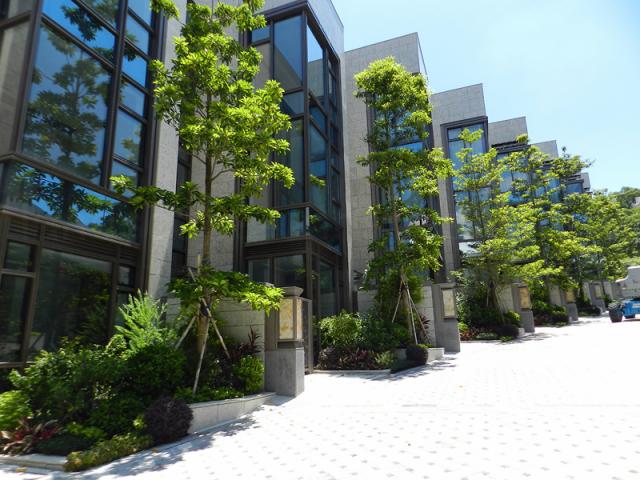