Where to Barbeque in Hong Kong?

With Summer here, it’s time to throw on the swimmers, shorts and flip flops, locate your best funny apron, find the beer coolers, stock up the eski, (portable ice cooler) grab your tongs and let’s get ready to BBQ.

What started out as an Ausssie joke, throw another shrimp on the barbie has become a world recognised activity, adopted by many nationalities as a way to bring people together around the fire. That dates back to the stone age, and Aussies sort of made it their thing but let’s not forget the Koreans have always had barbecue, pacific nations have used hot stones and coals to lay pits to BBQ, native Americans cooked over the fires, the cannibals in New Zealand and PNG gave quite a few invaders a roasting, so we’ve always done it. Cooked over heat from something on fire. Maybe we just enjoy it more now because we don’t do it every day like our ancestors, and we’ve got so good at the variety of things we can bbq, marinated, peeled,  blanched, seared, pickled and so on. The bar has been raised on the humble sausage.  And it’s no longer the blokes domain. Women are stepping up to the barbecue in numbers and staking their claim. Viva La BBQ.

Therefore in Hong Kong we have one of the best climates most of the year round to honour our ancestors and lifestyles by following on with the tradition to BBQ. Even on a cool dry day in the winter it’s perfect for a barbecue at the beach, it’s a lot of fun and an easy thing to prepare.  We have around 50 designated public BBQ pits set up by the HK government at beaches and parks so if that doesn’t say “turn the sausage” to you, then you really are missing out ! Beaches would always be my first choice, but there is something extremely satisfying as well about having a BBQ in the bush. It seems so primal. A more natural location. Our national parks are packed with sites, so if you don’t know where they are, stay tuned and I will give you a heads up on some of our favourite spots.

So let’s start with some beaches. Just remember to bring your own grill top, charcoal and lighter fluid before you set off, and check out what’s available to hire. All of these places are on line to get information.

Ok everyone knows this about Shek O but this really is BBQ heaven on the beach.  With the shade of the trees the pits are away from the hot sun, but seeing they are still directly right on the beach, you can swim between courses, and work on your tan. It does get crowded, our favourite time to go is after 4 pm, when the crowds are clearing out, and you can have the perfect dinner cooked on the beach with a magic sunset.

This is the small beach behind Shek O that has only one large pit so you need to ring and make a booking. Its right beside Bens Bar, so no shortage of bevies to go with your grilled food. Perfect for a group who want a bit more privacy. And the beach although not netted, is great for swimming, is smaller in size than it’s bigger brother, and dog friendly.

Tucked into Lantau island they have a number of BBQ spots set up, and you can also camp the night here. Equipment is for hire. Harmless black water buffalo roam the area and make for some interesting photos. I say that as my friend woke up to find one trying to eat the straw matt she was asleep on. Catch the ferry to Moi O and take the bus or cab from the ferry about 10 minutes. This makes for a really great day trip, leave early from Central pier and catch one of the last ferries back in the evening.

This is probably one of the most attractive views in Hong Kong. The BBQ pits are right overlooking the water at the far left side of the beach. It gets busy on the weekends, so you need to arrive early in the day. Being so close to Central, this popular location has a more chilled atmosphere to it’s neighbour Repulse Bay, and we like to go in the cooler months when there are less people about.

I’m only adding this because they have a spectacular BBQíng area that is enough to make you sign up for membership. You can choose from seriously great cuts of meat, sausages, fish and chicken and either cook it yourself or have them do it for you. It’s more fun to do yourself, and the scenery and views here are perfect to watch the sun go down. Also, being a private club, the toilets are luxury to what you’ll get at a beach. Tick that box !

Lo So Shing on Lamma Island.

This is my favourite little beach in Hong Kong. Its uncrowded, the water is super clean, and they have BBQ pits. The downside is you need to carry your supplies for a 15+ minute walk, but it’s well worth it if you do. Here you can bring your boom box as you’ll not be upsetting any neighbours, and you won’t be crowded out. There’s a small surf club and that’s about it. No shops so BYO. Ferry in and out.

BBQ in the Park

Sensational views out to sea from this grassy park high up on the hillside that has awesome geographical rock formations. It’s also a popular kite flying place, and surrounded by lush wild vegetation. This area forms part of the hiking trail which begins on Clear Water Bay Road near Tseung Kwan O and ends near the Clearwater Bay golf course. The Tai Hang Tun barbecue and picnic area along the way offers 72 free barbecue areas, on a first in first served basis. The panoramic views will not disappoint anyone.

Covering an area of about 5 hectares, Lion Rock Park is one of the best green destinations in Hong Kong. The country park has various facilities, including 26 barbecue pits and nice benches shaded by lush green trees. To make you feel less guilty about how much you ate after your barbecue feast, you can walk it all off on the way back.

This is one of the most beautiful hiking trails in Hong Kong. Only around  5 km long, unless you hook up with connecting trails,  you will pass through historical sites, bridges, aqueducts and dams. An absolute must for anyone who loves photography and nature. They have a number of picnic spots and BBQ pits along the way, Tai Tam Tuk intermediate reservoir dam is a favourite. Extraordinary views and well worth every step of the trail.

With all these great places and more to get BBQíng when you are throwing your next shrimp on the barbie? 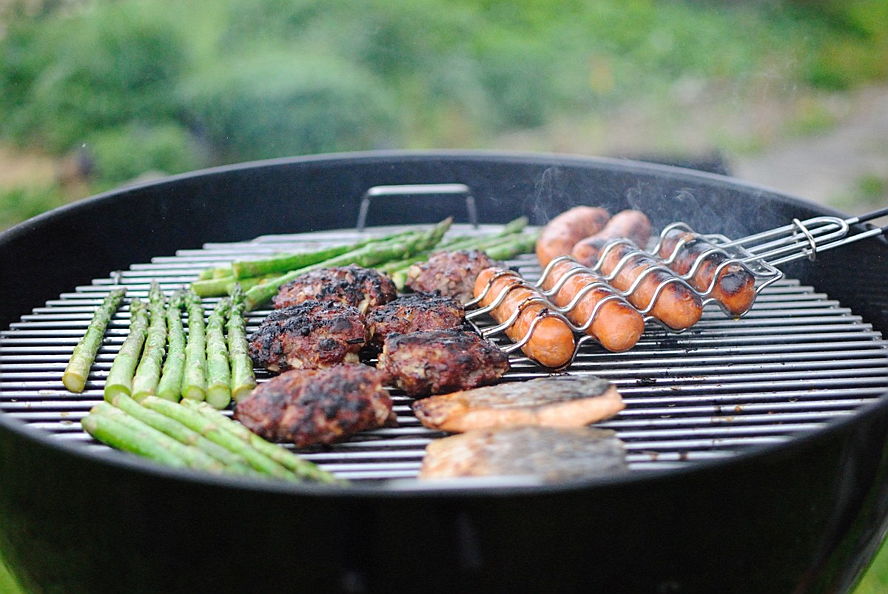