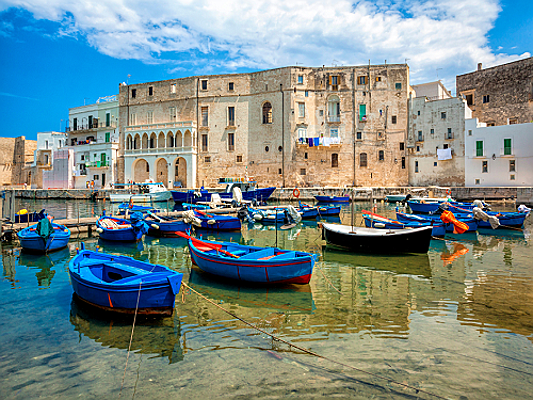 AN APULIAN TREASURE: THE CITY OF MONOPOLI

The city of Monopoli is considered one of the main economic, artistic and tourist centres of the Puglia region.

It is not difficult to see why, since the city of Monopoli is one of the most active and populous ports in the region.

Monopoli overlooks the Adriatic Sea and its port represents an important element in the urban context of the city, with its four inlets or coves - Porto Vecchio, Cala Batteria, Cala Fontanelle and Cala Curatori - which are an integral part of the urban fabric.

Its historical centre, of early mediaeval origins and built on the remains of a Messapian settlement, is extremely unusual, overlooking the sea and being surrounded by high and imposing walls.

It is also considered a real jewel of traditional architecture that harmoniously blends with the magnificent religious buildings and splendid palaces.

The access road par excellence to the ancient city is without a doubt Porta Vecchia, which allows you to penetrate directly into the ancient part of Monopoli, dominated by the Castello Carlo V and adorned with wonders such as the baroque Cathedral of Santa Maria della Madia, the beating heart of the old city; Piazza Garibaldi, animated by lively activity and overlooked by the Church of St. Francis of Assisi and the Church of Santa Maria degli Amalfitani; and Largo Palmieri, with its namesake palace.

Monopoli is also called "The City of A Hundred Districts". Its countryside, in fact, is divided into many localities (albeit less than a hundred), whose names recall the presence of a manor, a church, an old farmhouse that may have disappeared or other historical, artistic or geographical references.

The economy of Monopoli

The economy of Monopoli is mainly based on the agricultural sector.

The production and processing of agricultural products are highly developed and have fostered the growth of an increasingly thriving oil and canning industry.

In addition, as mentioned above, the movement in the port is remarkable and has represented fertile ground for a developed fishing industry and a specialised shipbuilding activity.

Tourist inflows have increased significantly in recent years. A recent survey among tourists highlighted the fact that Monopoli is highly valued for being the perfect combination of seaside resort and important cultural centre, thanks to the simultaneous presence of wonderful landscapes and interesting museums, places of worship, farms and rock churches.

In addition, since 2016 the tourism sector has received a further boost following the adoption by the municipality of a new official tourism brand, called "Heart of Apulia".

Another thriving sector in the Monopoli economy is certainly real estate.

Suffice it to say that during the past year in the municipality of Monopoli alone, the Revenue Agency recorded 607 real estate transactions. A number that very eloquently demonstrates how lively and sparkling the market in the city is.

The many architecturally significant and ancient buildings in the old town, the wonderful seaside residences and the enchanting farms in the countryside mean that the premium segment of the real estate sector is particularly developed in the city; that is, the segment dedicated to high-quality properties.

For more information or to learn more about the Engel & Völkers franchise system, specialising in premium real estate, click here.