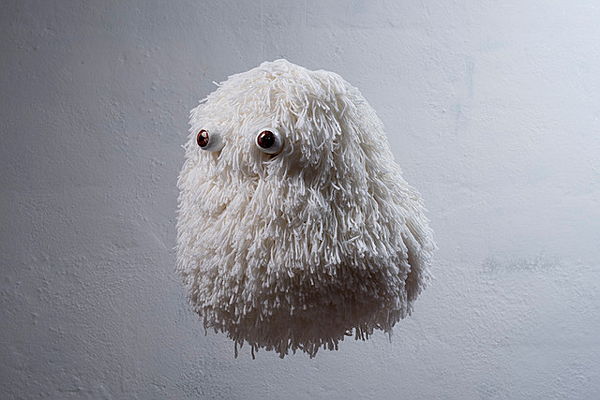 The artist Filippo La Vaccara (Catania, 1972) will exhibit about 20 works, of various sizes and unpublished, in the more than 140 square meters of the elegant liberty building of San Sebastiano Contemporary.
Several paintings, on canvas and on paper, and some light sculptures, together with the now more well-known terracotta "heads" (told in the video - for the first time on display - "Heads of / of Heads of", by Franz Baraggino), positioned in an installation designed by the same artist on the three levels of the new space designed by Davide Bramante to promote contemporary art in Sicily.
The exhibition curated by Mercedes Auteri and Aldo Premoli, has an ambitious and enigmatic title: FILIPPOLAVACCARA - HYPERMETAPHYSICS (which translated from Greek means "higher and beyond physics"). A tribute to one of the greatest moments of twentieth century painting, that of the Metaphysics of De Chirico, Carrà, De Pisis. An experience that tends to represent everything as mysterious, not only the great existential questions of all time, but also the enigma of things considered generally insignificant, which instead resonate in the life of each in their most symbolic and evocative aspect.
A bearded face of white wool, with two protruding eyes of shiny ceramic, suspended in midair looks at us. An anomalous and "hyper" statue "half" "tà" "physikà" (which translated from Greek means "higher and beyond physics").
Two "seers", De Chirico and Carrà, who met in a psychiatric hospital in Ferrara, a hundred years ago, had chosen the name "metaphysics" to indicate a precise philosophical reference to Aristotle and that part of ancient Greek thought that describes a reality that transcends that immediately knowable by the senses.
The first, De Chirico, said that the dream goes beyond the brain functions of space, time, causality capturing a truer reality.
That sense of surprise and that achievement of a non-contingent reality are for him the purpose of art.
For the second, Carrà, on the other hand, art is above all a search for pure formal values, volumes as for Cézanne, as in Italian painting between the 15th and 15th centuries, independent of any descriptiveness or narrativity, as in Antonello's from Messina, capable of bringing attention to mysterious details.
All this echoes in this Sicilian exhibition. An "excess" of metaphysics is condensed in the last works of La Vaccara. Empty landscapes, buildings like geometries, essential natures, which invite disorientation to feel like no place and, therefore, of all places.
The works we see here are symbols, like the great deer that welcomes us on display.
The loss of antlers that miraculously regenerate in the spring has often been associated with the resurrection of Christ. The continuous renewal of life, the process of death and rebirth. Falling and being reborn with an extra branching, strength increase with age. Depicted next to the Buddha, who was said to have reincarnated in a previous life in a golden deer. Graceful and elegant animal also connected to the alchemical Mercury, which acts as an intermediary with the psychic substance, a bridge between the conscious and the unconscious, providing us with the extraordinary possibility of illuminating the interior and allowing the deep Self to manifest itself in the evidence (clearly and illuminating), in maturity (wisdom and strength of ideas), in the ability to concretize the invisible in an open way (offered fully to the eye).
The works are presences, like the terracotta head, which observes us, changes, putting new stories in our mouths and new reflections in mind, of other faces like in the mirror. The works are "medium", they are a vehicle, like this van, a light sculpture in paper and wood, which flies over our heads.
A reversed perspective, a detail, an object, a shadow out of place, an intimate journey that the viewer travels alone, in search of himself.
All this echoes in this Sicilian exhibition, in a higher than normal degree, in an "excess" of metaphysics that condenses itself extraordinarily in the last works of La Vaccara.

Contact us now
Engel & Völkers
Licence Partner Syracuse
Thank you for your request. We will contact you shortly.