A steady price increase, continually shrinking resources on the housing market and an unbroken demand for real estate - these are all well-known phenomena in German metropolises. A lesser known but very pleasant development is happening right now in some East German cities. These cities and university towns are enjoying a high influx from rural areas. Here, too, the positive effects of low interest rates, an increase in purchasing power and missing alternatives for investments make for noticeable developments on the real estate market. While the “usual suspects” show a constant price trend on a moderate level, the housing market trends in East German cities and university towns are highly dynamical. 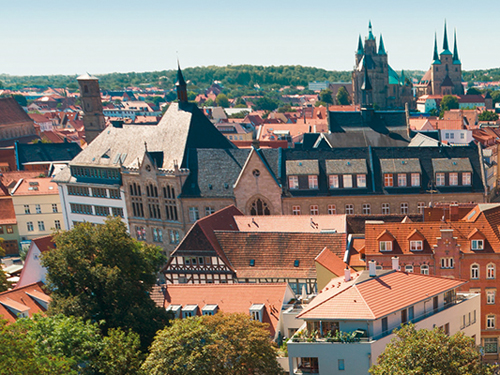 The constant high demand for housing in and around the metropolitan regions of Berlin, Munich, Hamburg and Frankfurt is leading to further price increase in real estate. But investors also find worthwhile investment objects in smaller cities and university towns. The large number of students moving in and the affluent university staff are bringing with them a constant dynamic on the rental market and thus a low risk for a capital investment. The price increase in Hessian university towns Universitätsstädte Mainz und Darmstadt is for example +15% year-on-year.

East German cities are attractive alternatives to the popular metropolises

An increasing interest in real estate is noticeable especially in the former East German federal states. Apart from the well-known metropolises in which the luxury market is flourishing particularly, East German cities are a great alternative for young families looking to establish a comfortable life including a good infrastructure and a distinctive cultural offer. This is how Leipzig became a popular investment objective, showing the largest rate of population growth of nearly 10%.

Since the German reunification in 1990, the so-called catch up effect led to a step-by-step adaptation of the West German economic situation and way of life. A growing employment rate leads to an increasing purchasing power of which the whole region’s economic power and the real estate market trends profit sustainably. The increase of purchasing power in Chemnitz rose by 10% since 2015. The resulting positive population density is making the East German cities Leipzig, Dresden, Chemnitz, Potsdam, Erfurt and Halle (Saale) attractive locations for condominiums or capital investments.

University town as well as upcoming metropolis, Leipzig shows an extremely dynamic economic development. The average purchase price in real estate increased by 45% since 2013, whereby even the effective property prices of federal state capital city Erfurt were excelled. In total, the rising of offer prices for condominiums in East German cities is enormous - they are partly up to more than 20% and promise further growth.

Gain detailed insights into the development of purchasing power and real estate market trends in former East Germany and every other German sub-sector in our Engel & Völkers market report 2016/2017.