The term “smart” is often used today to describe many technological developments that have had a significant impact on our everyday lives and will continue to do so in the future. A prime example being the smartphone.

The term smart home, which describes the intelligent networking and control of household devices, locking systems, heating systems, shutters and other electronic apparatus, is also being used and understood more readily. Starting with a smart home, the next logical step in this direction would be a smart quarter or even a smart city. But what does this actually mean? 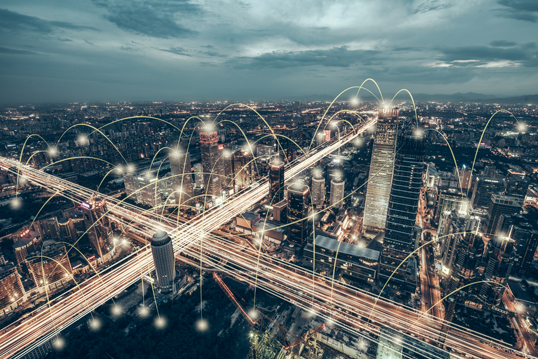 Cities are the habitats of the future

There are two global developments that seem unrelated at first glance but are irreversible from a human point of view and will have a major impact of our future. One of them is the progressing digitisation in all areas of life, the other the worldwide population growth. By the middle of the century, around ten billion people will be living on this planet, two thirds of them in cities or megacities with more than ten million inhabitants, just like present-day New York, Tokyo, Shanghai, Mumbai, Mexico City, Istanbul, Kinshasa, to mention but a few

The smart city concept entails the development, provision and use of digital technologies and the data generated therefrom (keyword: big data), which will be used in all urban areas to secure the quality of life for the inhabitants. This affects key areas such as energy and water supply, traffic control systems and general infrastructure, health, education and administration. The first steps along the way: the use of drones by the commercial sector and government agencies, autonomous driving and robotics.

Will the smart city concept prove successful on a wide scale?

This question cannot be answered with a simple yes or no at this stage. Moreover, each city is different, so a “one-size-fits-all” approach is unrealistic. First attempts and experiments are underway in various countries, among other places in Singapore, Barcelona, Denver and many other cities. In Germany, a smart quarter is being established under the direction of the municipal works and a real estate company in the district of Oststadt in Karlsruhe, which is to be completed in 2018. So the trend is there, and it will have a major impact on the real estate sector and open up new business areas

A holistic approach is needed

But at present, all of these projects only deal with the one or other aspect of the general infrastructure, or with individual quarters, such as in Karlsruhe. To apply the smart city concept to an entire city with millions of inhabitants requires more than further research and intelligent solutions. So far, there is often no underlying holistic approach that can be implemented in unison by (local) authorities, technology, the building and real estate sectors, as well as the urban population. On the other hand, cities “must” get smarter in the future, otherwise the problems we already see today in the areas of individual transport, energy supply, health, waste management and general security will only get worse or even lead to a collapse of certain segments.

For the real estate sector, the smart city concept is both an opportunity and a responsibility. The focus is shifting more and more towards the individual and his personal environmental requirements. The smart use of digital possibilities, such as the analysis and interpretation of collected data, offers the potential for greater consulting efficiency and more flexible support in higher quality. However, the real estate sector must be prepared to acquire new knowledge and meet new demands.