Where to find the most exclusive luxury apartments in Vienna

It was Haydn's city. Then it was Beethoven's, and Schubert's after that – Vienna's history is undoubtedly a rich one. But while property gurus around the world are fascinated by the city's history, they're more interested in its present.

House prices in Austria have been consistently on the rise, and this increase in demand is spread across the country. Unsurprisingly, the property market is especially buoyant in the capital city of Vienna. Here, we take a closer look at Vienna's luxury real estate market. 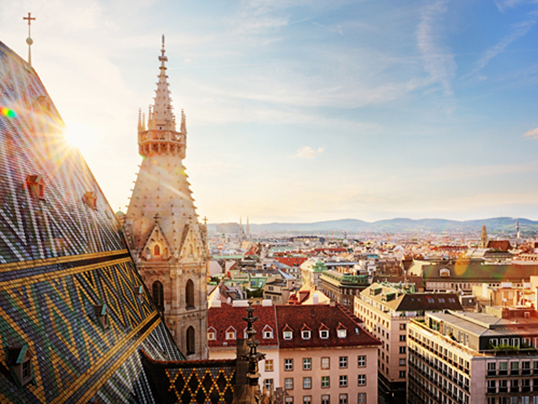 The foremost attractions of the Austrian capital are obvious – history and culture. From the city's architecture to its wealth of galleries and museums, Vienna's heritage is there for all to see. However, spending time in the city isn't just about looking backwards – the rich classical music scene is still very much alive, now supported by a selection of high-end restaurants, world-class shopping, and some of Europe's most spectacular green urban spaces. That's before we've even mentioned the very attractive luxury real estate market in Vienna.

Identifying soon-to-be-gentrified neighbourhoods isn't easy, but in Vienna there's no need. Its most appealing neighbourhoods are the historical ones.

Luxury apartments in Vienna can be found across the city, but there are a handful of neighbourhoods that stand out as areas of particular interest. The city's First District is historically one of the city's property hotspots, with an abundance of stunning period properties. The neighbourhood is actually a UNESCO World Heritage Site, home to the Imperial Palace and a selection of stunning baroque properties – many of which are split into elegant apartments. In addition to being a beautiful neighbourhood, the First District is located right in the heart of the city. This is a location ideal for city workers as well as those keen to get the most from Vienna's wealth of culture.

Buyers who are looking for exclusive houses and villas will want to head a short distance outside of the city centre. Just a 15-minutes drive from Vienna's city centre, you'll find the 13th, 18th, and 19th district – all desirable places to live. In these areas, you'll find historical mansions with good grounds, all within easy reach of the city's most enchanting attractions. These districts surely offer some of the grandest luxury homes in Vienna.

The city's most desirable properties

As a city of great historical heritage, it's no surprise that Vienna's most sought-after properties generally come with an element of classical charm. Baroque architecture is prevalent in the Austrian capital, with scale and grandeur playing leading roles. Even smaller apartments will typically benefit from high ceilings, over-sized period features, and dramatic windows.

With such a rich culture and uniquely luxurious properties, it's only a matter of time before Vienna finds its way into the world's top 5 luxury markets. For more insight into luxury apartments in Vienna and luxury living, visit the Engel & Völkers website.