The 77-metre MY Legend is a superyacht for all seasons. Once a Soviet icebreaker, she was converted to a luxury explorer in 2015 and is now in the vanguard of expedition yachts, plying the world’s most remote and dramatic waters in exceptional comfort and style. Onboard she has a spa, sauna, beauty salon and a gym with a view, and for the adventurous she deploys the ultimate toys – a helicopter and a three-man submersible. 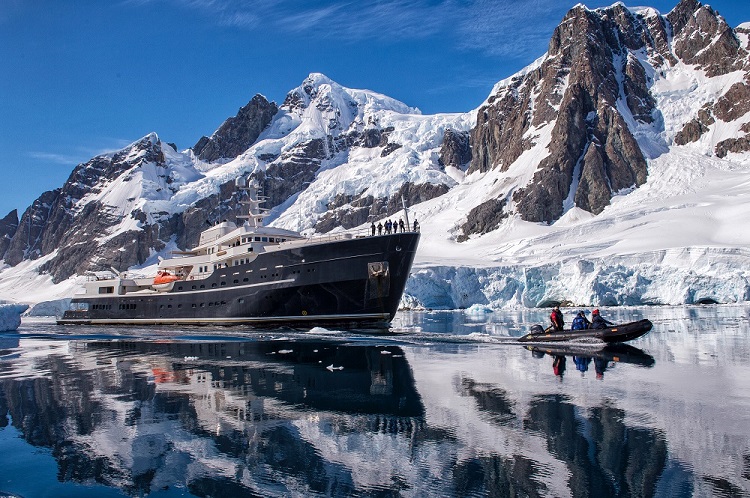 Rarely is a yacht so suited to her name. Legend is wreathed in romance, a wandering knight that travels boldly to the farthest reaches of the planet on the quest for adventure. Once a Cold Warrior, Legend is now the vanguard of expedition yachts, plying a leisurely and luxurious circuit, offering exploration and adventure, in comfort, in the world’s coldest, most dramatic regions. She is exceptionally well suited to the job. Stable and strong, resilient in all weathers, she has a helicopter to take you skiing and a submersible to explore sub-surface, plus snowmobiles and luxury launches for ice-bound safaris.

Crucially she has cabins for 26 guests, allowing her to take larger families and groups than other superyachts (interestingly she offers some weeks by the cabin as well as exclusive charter). There are 19 crew for the yacht itself and space for another 10 staff for any ongoing expedition – ice pilot, doctor, expedition leaders and naturalists, everyone you need to help you get the most out of these little-explored regions. Legend’s range is an exceptional 7,000 miles, but this in turn means she must carry so much more. Visiting Antarctica is a huge and detailed logistical operation – it’s not as if you can pop round to the shops for resupply.

She was launched in 1974 as a Class 1 Icebreaker (not simply Ice Class) and worked as a tug in the frozen northern wastes of the Soviet Union. After the end of the Cold War, she was eventually sold in 1999. As swords were beaten into ploughshares, so she underwent a refit to leisure in 2003. Then in 2014, Verkerk Yachting Projects wove luxury into her adventurous DNA. The refit took place at Icon Yachts in the Netherlands, overseen by Rene Couperus: “Legend’s owner anticipated everything he wanted to do with the yacht and had planned it all in detail. For instance, we installed a very sophisticated fuel storage system that could contain a huge amount of helicopter fuel, 7,000 to 8,000 litres. The ship needs this if it is travelling to such remote areas with 26 passengers.” It was a near-complete rebuild; a heli-deck had to be constructed at the rear and the foredeck was converted to stow the snowmobiles, the 3-man submersible and helicopter blades.

Finally, her functional, rounded stern was reworked and a swimming platform added instead, increasing her length to 77.4 metres. “She’s a very solid ship, and very stable, with thick plating and thick frames. The owner decided on a more rugged look, so we used different materials on her: she caused quite a stir at the time and she has been imitated since. She is not highly polished, so she doesn’t look as shiny as the other yachts in Monaco. But of course you don’t want a shiny hull if you’re an icebreaker.” 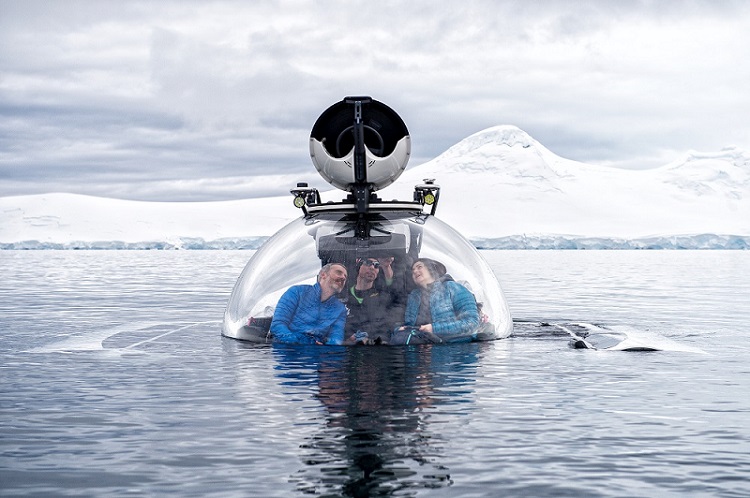 However, if Legend’s structure is one of extreme practicality, inside she is styled for exceptional comfort, enabling customers to travel in unexpected style. Legend has 13 en suite guest cabins, including a master suite and two VIP suites, each of which is decorated in the character of the world’s great cities – Paris for the master suite, spanning some 63 m2, complete with a sitting area and two en suites; London has English country scenes; Amsterdam is adorned with Dutch paintings and its bathroom decorated with original Delft tiles. In addition to her Russian paintings, Moscow retains a desk from the original ship. Besides the captain and mate, many of the crew are drawn from the hospitality industry in order to create the experience of a boutique hotel. Legend has a spa and sauna, a beauty salon, a gym and a 14-seat cinema to see recordings of the day’s adventures. She even has a whisky bar and cigar room. The library boasts a marble floor and there is even a piano lounge. If no guest wants to tinkle the ivories, it will play itself. Of course, in cold climes, passengers spend a lot of time indoors, but Legend’s aft boat deck saloon, swathed in glass, draws the raw, dramatic scenery into full view. And to get even closer to the icebergs and snow-capped mountains, there is an ondeck Jacuzzi, for 16. 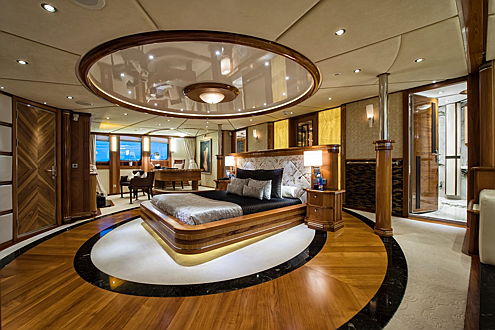 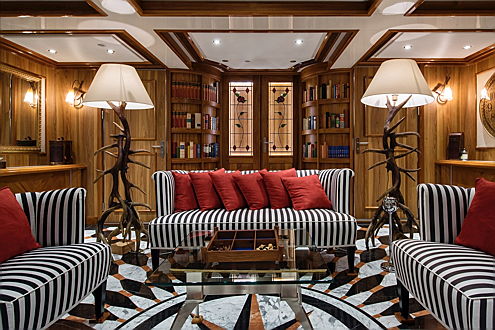 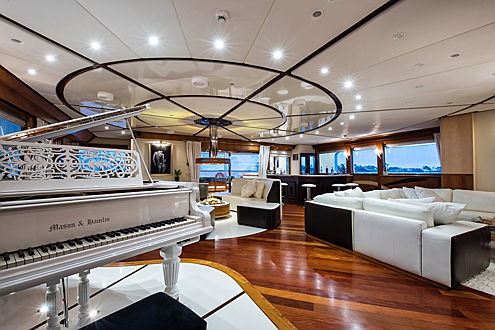 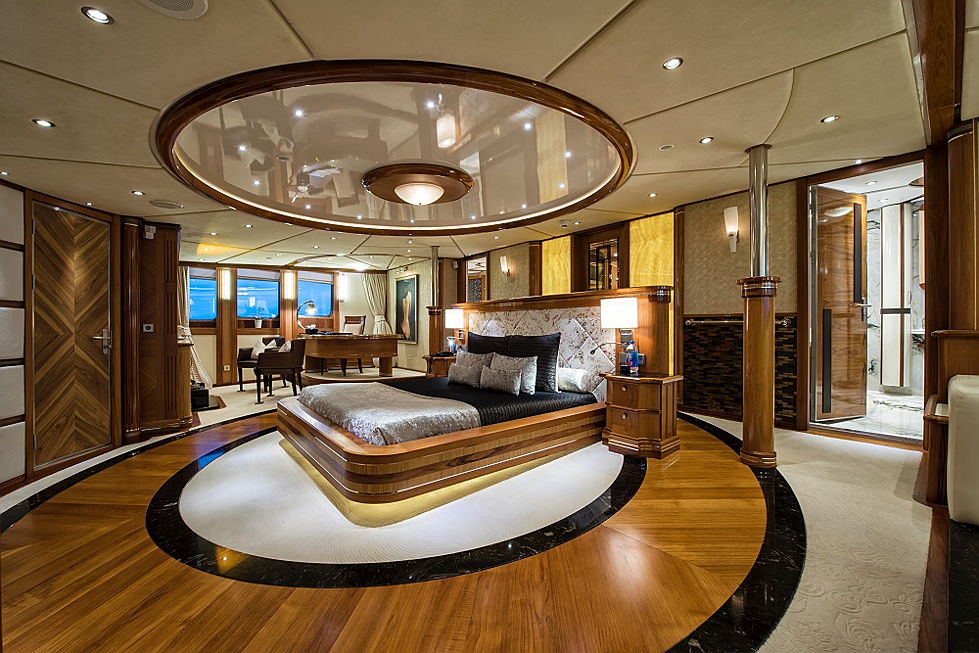 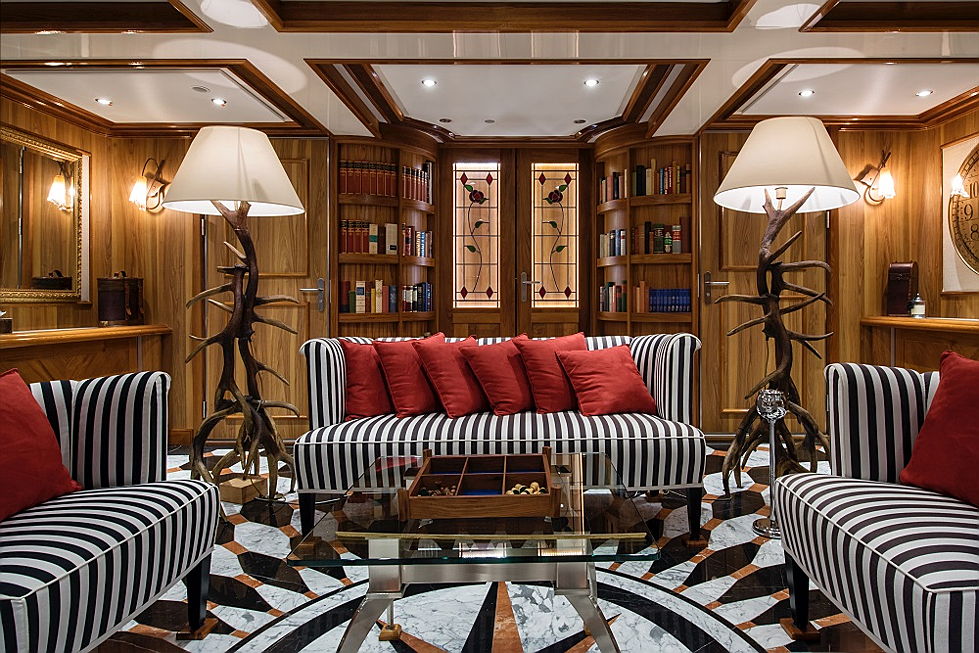 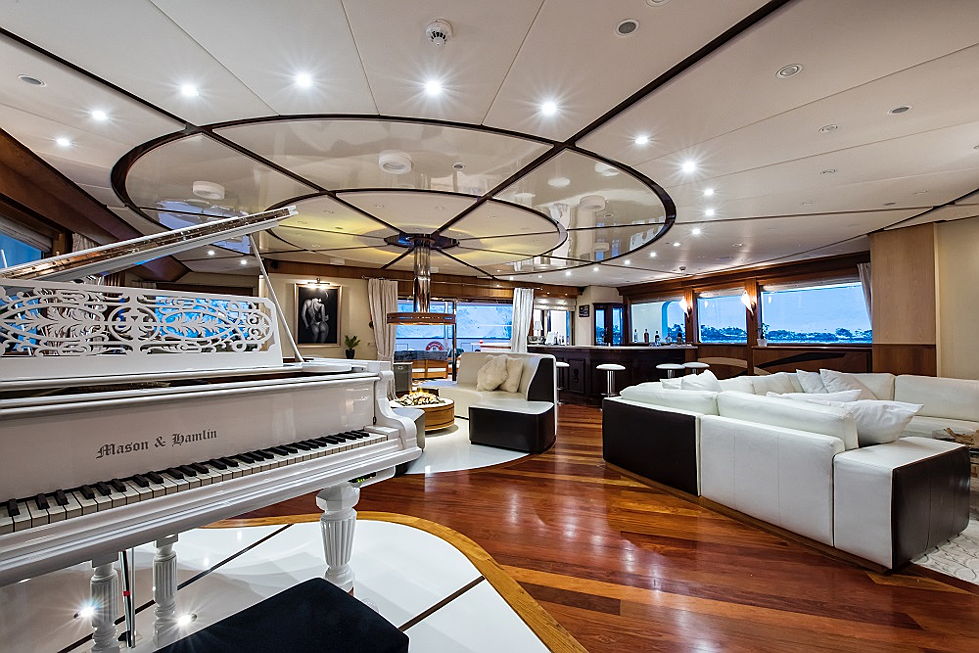 For all the onboard comfort, nowadays we hear that true luxury in travel lies in experiences: Legend outstrips them all in exploration and adventure. Ben Lyons of Eyos, Legend’s expedition provider (which arranges their expedition leaders and guides to plan the off-ship activities), is in no doubt of what she is capable: “Legend is an incredible platform from which to explore these locations, in all directions. She has a sub to observe below the surface and a helicopter to explore mountains above, and the robust hull from her former life means she can venture further into the ice. She spent New Year 2019 in 9/10ths pack ice south of the Lemaire Channel. No other luxury boat can do that.” These are incredible opportunities. Legend’s submersible can take you down to as deep as 300 metres to see Antarctica’s denizens – pods of orcas and huge octopi – while her helicopter can whisk you up a mountain to ski slopes never visited before. Perhaps you want to reach out to touch an iceberg, or take lunch on a snowbound outcrop watching the tail-flukes of diving whales. The wildlife in these regions is fearless and unconcerned by your presence: sea lions simply eye you quizzically from their perch on an ice floe. Legend follows the polar summers, so she is in Antarctica early on in the year and then heads north to Disko Bay off Greenland, Baffin Island or the Baltic. The scenery and the colours change, of course, and the animals too – penguins are replaced by polar bears, seals by walruses and narwhals. But Legend herself? She serenely continues her quest for adventure. 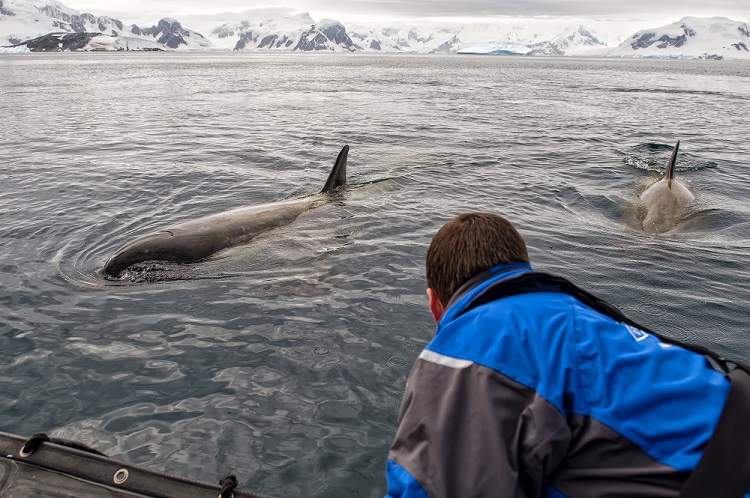 Contact us now
Engel & Völkers
Licence Partner Yachting
Thank you for your request. We will contact you shortly.