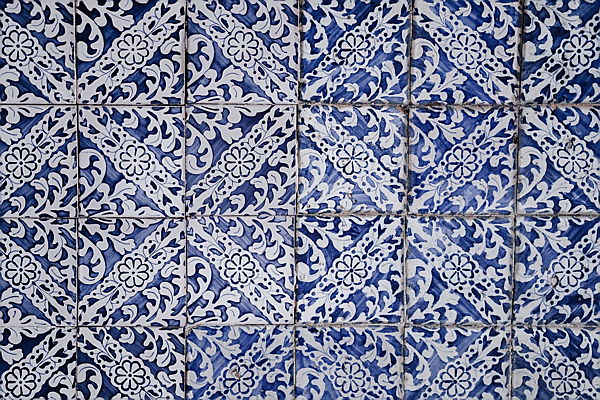 The handpainted tiles of Lisbon are a true city icon. They can be seen in many building façades and in the interior of various monuments, historic buildings, and houses. Today, we will reveal 10 places where you can see the most beautiful tiles of Lisbon. Come and find out what they are.

The tiles of Lisbon are a must-see landmark of the city. By strolling the streets, it is impossible not to notice the richness of these tiles that, in a more colourful and monochromatic way, enrich the city façades.​The tiles in Portugal have a long history. Imported from the neighbouring Spain, Seville, they have been in our country since the fifteenth century, and only after the Lisbon earthquake in 1755 we began to make more use of them.

After the earthquake, the residential palaces and houses in Lisbon started to opt for this type of decoration just as much for the exteriors as in many cases, for the interior rooms decoration.
Moving away from the Hispano-Moorish tiles, Portugal began producing its own tiles, many of them even counting traces of national history through their images and adornments.

The visual and graphic identity of the city of Lisbon is expressed through most of these tiles. Their production, however, is far from over. Artists of our time continue using their creativity to keep this tradition alive in the Portuguese capital.

Between the oldest and the most recent sites, come and find out where you can see some of the most beautiful tiles of Lisbon.

1. National Museum of the Azulejo

Located in the Beato area of ​​Lisbon, the National Museum of the Azulejo is an undiscovered site for many tile lovers.

This place is situated inside the Convent of Madre Deus and contains tiles from the 15th century.

2. Palace of the Marquises of Fronteira

The Palace of the Marquises of Fronteira, located in the Benfica area, is another good example of a building with beautiful tilework in Lisbon.
This eighteenth-century palace contains tiles on its exterior, in its garden and also inside its rooms, chapel and library. Many of these tiles are panels on the walls that represent the Portuguese history.

Situated next to the National Pantheon, this house is located at numbers 124 and 126, and portrays the wonder of Lisbon tilework.
The yellow, white and blue tones reveal a very characteristic history of the 19th century romanticism.

The Noucentista factory of Viúva Lamego, located in Intendente, is a good example of the Lisbon marvel and its tilework.
The exterior part of this factory is totally covered in tiles, forming a stunning rainbow of colours.

In Quinta de São Sebastião, in the Lumiar area, there is a palace that perfectly exemplifies the beauty of the Lisbon tiles. This palace, which is currently for sale by Engel & Völkers, displays the most stunning tiles on its exterior, with a touch of antiquity and luxury that characterises this region of Lisbon so beautifully and well-known for its old and rustic country houses.

André Saraiva is the artist responsible for this recent tile mural, located in the vicinity of Feira da Ladra, in Botto Machado.
This Portuguese-French artist known as Mr. A helped bring colour to this region of Lisbon with tiles that represent some of the top Portuguese and French monuments.

In Queluz, we also have the National Palace of Queluz. This palace, inspired by French Baroque style, is an example of the nineteenth century architecture and one of the most beautiful monuments located between Lisbon and Sintra for representing wonderful tilework.
The interior of this palace contains a neoclassical style of tiles representing mythological scenes, the seasons and even the various continents.

The D. Afonso Henriques panel, with its conquest of Lisbon, is perhaps the most acclaimed tile of this monastery from the twelfth century and renovated in the sixteenth century.
In addition to this panel, other baroque tiles make the monastery a must-visit place to see the Lisbon tiles.

The 18th century tilework of the Convent of Cardaes is also worth a visit. These stunning murals with marbles and gilded carving and an undeniably beautiful decoration reveal traces of joanine.
This is a good place to see tiles that tell more about the history and the stories that mark our country.

This building is part of Greater Lisbon but could not be left out on this list of places to see the most beautiful tiles of Lisbon, since its interior is filled with plenty of tile murals.
The medieval palace in the centre of Sintra has some of the most beautiful Hispanic-Moorish tiles in the Lisbon region, with several rooms decorated with baroque tiles.