When considering stand-out restaurants, we tend to think first of the food – naturally enough, since we’re visiting to eat. But restaurant interior design also has a role to play in the luxury dining experience, shaping the establishment's all-important ambience.

Restaurant architecture requires a precise balance between atmosphere, privacy, function and a stunning interior – here are a few of our favourite spots that get that architectural balance just right. 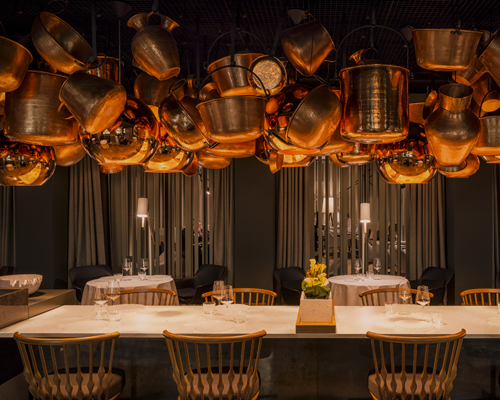 Das Stue, the Danish for ‘living room’, is a hip hotel in Berlin occupying the former royal Danish embassy. The hotel’s restaurant, 5 – Cinco, is run by famous Catalan chef Paco Pérez. The building dates from 1939 and has been updated by designer Patricia Urquiola, with the dining room centring around a cluster of Tom Dixon copper pendant lamps that give the space a warm, burnished glow.

The new arts centre for Fondazione Prada houses one of the quirkiest cafés in Milan. Named Bar Luce, it was designed by the film director Wes Anderson and features candy-coloured booths inspired by 1950s and 1960s Milan and walls that nod to the famous Galleria Vittorio Emanuele, one of Milan’s most symbolic buildings. Formica floors, veneered wooden panels and a ‘miniature’ version of the vaulted glass roof of the Galleria elevate it beyond mere pastiche.

It goes without saying that New York is home to some of the grandest architecture in every category, and restaurant architecture is no exception. French designer Jacques Garcia is responsible for the ornate restaurant and bar at Manhattan’s NoMad hotel. Using rich materials, sumptuous colours and dark wood, he has created a restaurant interior design experience that is historical, traditional and almost sensuous. The mahogany bar features carved elephants, while flames crackle beneath the antique mantel of the enormous fireplace. 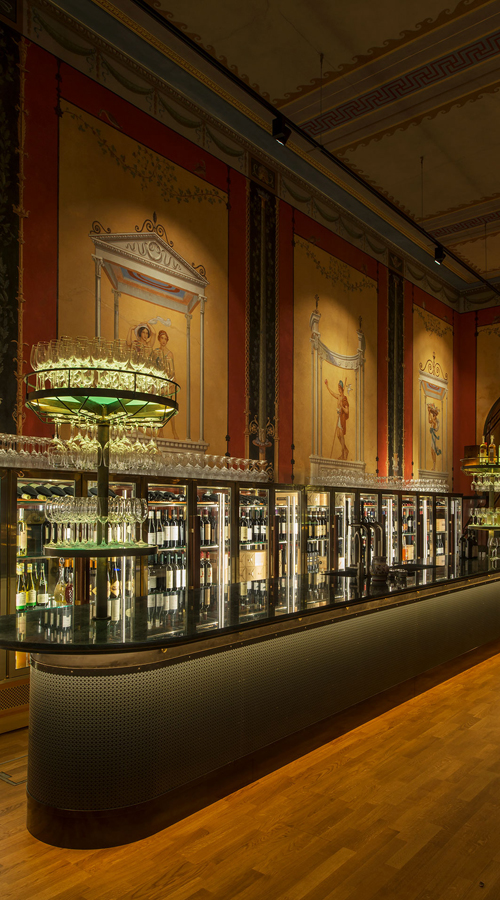 An early 20th-century cinema in the heart of Sweden’s capital has been elegantly transformed by Millimeter Arkitekter into one of Stockholm’s most inviting dining locations. L'Avventura was created to be both ‘grand and familiar’, so the restaurant interior design features cosy round tables with intimate lighting, velvet seating and live mature olive trees. The building’s original architecture, designed by Björn Hedvall in 1927, provides a backdrop of high ceilings, wall paintings and stucco mouldings.

Restaurant architecture is ever-evolving, so here is an extra special mention for Modernist fans. Enthusiasts of this particular movement will adore the renovated 1950s restaurant in Helsinki’s Hotel Palace, the wooden design of which – featuring teak walls, ceilings and furniture – was particularly daring for its time.

Whether sleek, ornate, modern or traditional, each of these venues gives the diner a feast for the eyes. What’s your favourite location for its restaurant architecture or bold interior design?