International Women’s Day 2019 is demanding #BalanceforBetter, so today we're celebrating the women of architecture. Here are five talented female architects known for their trailblazing work, together with their own words for some International Women's Day quotes to inspire you. 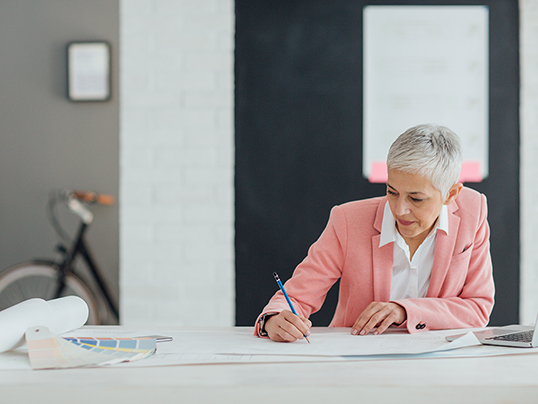 Griffin is primarily known for her work with Frank Lloyd Wright, developing the American Prairie School of architecture. Some commentators suggest she was its driving force, though she never claimed credit. In her later years, she brought the school’s ideas to newly independent India and Australia.

Alongside her buildings, her drawings remain a glorious legacy. She shares some valuable wisdom in her unpublished memoir, Magic of America: ‘What the Gods have given us we are under obligation to share with humanity, with the world.’

Irish-born Gray was one of the leading lights of Art Deco and Modernism, working both as an interior designer and architect. Her philosophy was that ‘[a] house is not a machine to live in. It is the shell of man, his extension, his release, his spiritual emanation.’

Gray is renowned for her redesign of socialite Juliette Lévy’s Paris apartment in 1917, delivering a result that presaged Art Deco. In 1926, after training informally as an architect, she designed and built the E-1027 Modernist mansion that so impressed Le Corbusier.

Italian-born Bo Bardi is celebrated not only as an architect but also as a prolific artist and designer of furniture, jewellery and scenery. She moved to Brazil in 1946 where her work, inspired by her adopted country’s popular traditions and culture, became known for blending Modernism with local sensibilities.

A member of the Italian wartime resistance and a lifelong activist, she was highly conscious of the social and political implications of her work. She said: ‘Architecture and architectural freedom are above all a social issue that must be seen from inside a political structure, not from outside it.’

Today, Zaha Hadid is one of the best-known names in avant-garde architecture. Her dynamic designs are rich and diverse, ranging from the flowing lines of the London Aquatic Centre to the interlocking prisms of the Guangzhou Opera House.

Hadid is also renowned for her drive to succeed in a male-dominated business. In a sea of inspirational International Women’s Day quotes attributed to Hadid, perhaps the most important is this: ‘People used to think women did not have enough logic. Well, that is absolute nonsense. I don’t know the ego of a man, or how their mentality works, but there is no difference at all in capability.’

Sejima is one of Japan’s foremost architects. She’s achieved remarkable success, especially considering her profession and country have both historically struggled with gender equality.

Sejima’s work incorporates generous amounts of glass and public open space, connecting visitors with the world outside the building and to each other. Her approach to the community aspect of architecture is best summed up by this quote: ‘I have a dream that architecture can bring something to contemporary society. Architecture is how people meet in space.’