In the second half of the 20th century, a world basking in post-war possibilities became the platform for a new type of business architecture: corporate modernism. Large corporations began to showcase their forward-looking attitudes and business models by investing in futuristic, modern corporate architecture. Their headquarters and corporate buildings became their trademarks. This was epitomised in the Lever House building, brandishing their ideals for the world to see with clean lines, large windows and simple forms. 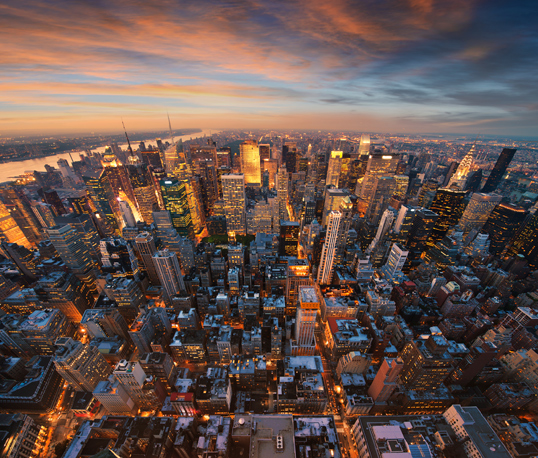 Setting the stage for corporate modernism

Sometime thereafter corporate architecture became cheaper, faster and a thin imitation of the sleek design of these early buildings. More recently a company’s headquarters has once again become a figurehead for their innovative ideals. The BMW ‘four cylinders’, built in 1973 and given a preservation order in 1999, is a fantastic example of corporate modernism. It plays on cylindrical forms instead of the expected cuboid manifestation. Instead of competing in the ‘height race’ visible in so many city structures, corporate buildings seem to be competing for the most stylish and well designed structure.

Some of the most stunning examples of corporate buildings include the World Trade Organisation headquarters in Geneva, the raised transparent cuboids displaying glowing examples of a Bauhaus-like transparent corner. The equally glassy City Green Court by Richard Meier & Partners Architects nods to Czech cubism, adding south-facing balconies to give a playful aspect to the geometric form. Austrian railroad company ÖBB have broken all the rules with their headquarters by Zechner & Zechner in Vienna. The original formal constraints of typical corporate modernism have been cast aside with this dynamic and curving building, evoking the speed of its industry. Although bucking the trend of simple and geometric, the Red Bull offices in Fuschl am See, Austria, have also long been known for their iconic design; the conical hat shapes floating on water became a tourist attraction as well as a business success.

Of course there’s now no need to have only one prestigious building to your corporate empire’s name. Microsoft’s German headquarters comprises iconic cuboid shapes, so well-attached to the brand identity they look like a stylised, physical manifestation of the company’s logo. Their European headquarters, however, cuts a striking figure with their sharp, three-pronged building and curving glass sides; a dramatic and powerful design.

Engel & Völkers’ Strandhaus, part of Hamburg’s fast evolving HafenCity project, is both true to the sleek lines of corporate modernism and an individual and iconic corporate building. Designed by Richard Meier & Partners, it plays with the simple geometric structure, with balconies adding intrigue to the minimalist corporate architecture design. Transparency, natural light and the colour white has played a fundamental part in Richard Meier’s design of this building, and many of his others. These are 'also dominant throughout Engel & Völkers branding', said CEO/Founder Christian Völkers, making the project a perfect pairing.

There are 66 exclusive condominiums in the 16-story tower with their own separate entrance, and two large penthouses, enjoying a fantastic panorama of Hamburg. Another component of the Strandhaus development is the Engel & Völkers headquarters, a space where the 'brand can be experienced' according to Christian Völkers. The core of the offices will be the double-height entrance lobby,  and the five levels above are to be designated office space and the new home of the Engel & Völkers Academy.

To find out more about the conception and development of the Strandhaus, head to Engel & Völkers Strandhaus project page.