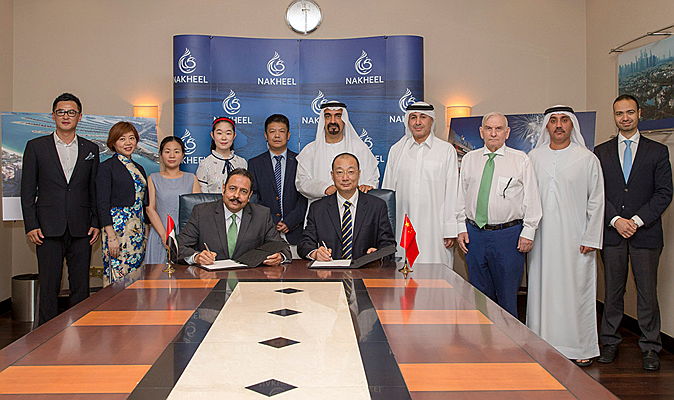 “Today’s signing is a major milestone for The Pointe, as it means work on its centrepiece – the fountain – is now underway, and we are one step closer to delivering this eagerly-anticipated destination.” - Ali Rashid Lootah, Nakheel Chairman

Master developer Nakheel has signed a contract worth AED66 million for a spectacular, choreographed fountain at The Pointe, its new, AED800 million waterfront dining and entertainment destination on Dubai’s world-famous Palm Jumeirah.

The developer has appointed one of China’s largest fountain specialists, Beijing Water Design, to deliver and operate the fountain, which will cover a 12,000 square metre area of water at the tip of the island, across the bay from Atlantis The Palm.

Speaking at the signing ceremony at Nakheel’s Dubai headquarters today, Lootah, said: “Palm Jumeirah, our flagship project, is already one of the most popular, sought-after destinations for Dubai’s residents and tourists. The Pointe, our latest addition to this ever-evolving island, is an iconic, must-see attraction that adds a new dimension to the city’s dining, retail and entertainment scene.