Horst Burbulla wants to build a tower: 220 metres high, with an event hall, a viewing platform and restaurants. The imposing object is to be located in Bonn. The 61-year-old entrepreneur lives there.

"There is nothing pathetic about it", he says. It is not about "giving something back" to the city. He is simply enthusiastic about his idea and wants to share it with Bonners and tourists. " Half of the estimated 80 million euros construction costs are to come from a Burbulla foundation, the other half is to be financed. 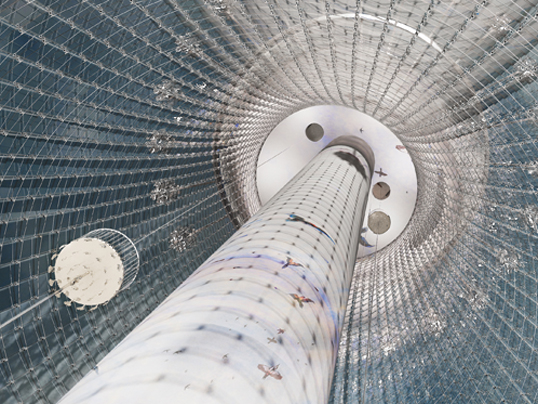 Design was created "while scribbling around"

If the tower called "Aire" were actually built - it would be anything but standard. First association of most who look at the design: Its top looks like an upside-down chandelier. The design was made by mechanical engineer Burbulla himself - it was created "while scribbling" on business trips.

At first many viewers react hesitantly, says Burbulla. "Bonn is not Dubai after all," he is told. He knows that the tower needs to be explained. "We started with street stalls, but that wasn't so successful," says the entrepreneur.

Showroom in the city centre

That is why he is now presenting the project in a showroom in the middle of downtown Bonn. The showroom - actually a retail space - was arranged for him by Sandra Kraus of Engel & Völkers Commercial Bonn: just under 480 square metres on Fürstenstrasse. The interim lease runs until the end of March.

Many walkers pass by there on Fürstenstrasse. And many of them stop by Burbulla and his employees. The showroom is open daily from 2 pm to 8 pm. Large illuminated pictures and videos show how the tower should look from the inside and outside. An architectural model presents it to the visitors, and there are also events that sometimes have nothing to do with the tower: a piano concert, for example, or a fashion show.

Collecting votes for the petition for a referendum

Those who just drop by, usually spend 20 to 25 minutes in the showroom, Burbulla has watched. Afterwards many of the visitors would sign his list, he says. Because that is the real purpose of the presentation in the showroom: Horst Burbulla wants to initiate a citizens' petition in favor of the tower.

He needs 9944 signatures for this, and has already collected almost 3700. He is satisfied with the interim result: "Everything in time", says the initiator. By summer 2020 he wants to have reached the target of 9944 signatures. If he succeeds, the chances of his project being realized will increase. Because then the city council would have to deal with the issue.

Horst Burbulla has already received support from the Bonn district group of the German Hotel and Restaurant Association of North Rhine-Westphalia (Dehoga): the "ambitious project" is a tourist asset, Dehoga says according to the General-Anzeiger.

More pictures and info can be found on aire.live.