On the occasion of a real estate talk, the Market Center Elbe invited more than 100 guests to the atrium of the Engel & Völkers headquarters in Hamburg's HafenCity. The renowned architect Hadi Teherani was on site as a guest of honour and speaker, presenting insights and background information on his works. 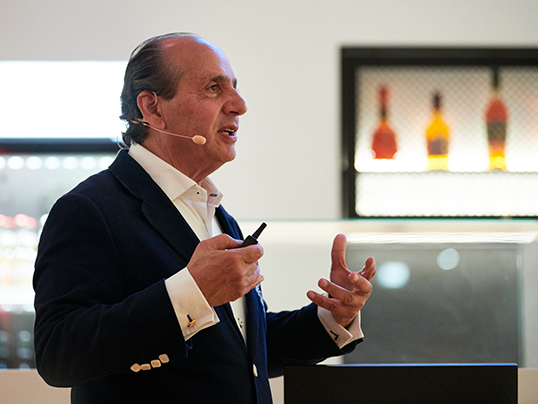 Hadi Teherani is an established figure in the architectural world. Countless striking buildings in metropolises all over the world can be traced back to the work of the architect, who was born in Tehran. Teherani presented to an interested audience during a real estate talk in a relaxed atmosphere in the atrium of Engel & Völkers Headquarters where he gets his inspiration from and how a vision turns into a finished object. After a brief welcome by Philipp Niemann, Managing Director of the Engel & Völkers Market Center Elbe, Hadi Teherani led an excerpt of his previous works and explained his "holistic approach", the holistic claim with which he creates his works. According to the architect, the city, architecture, interior design and product design are atmospherically inseparable and therefore cannot be designed separately.

So it came at no surprise that in addition to striking buildings such as the Kranhäuser in Cologne or the Dockland office building at Hamburg harbour, the German-Iranian's portfolio also included numerous pieces of furniture, textile coverings and decorative interior objects.

Architecture as a link between past and future

Following the lecture, the audience had the opportunity to ask questions about Tehrani's work. The architect answered the particularly piquant question from the audience as to which building of the last ten years he would most like to have demolished with his understanding of the connection between architecture, history and memory culture. According to Teherani, a city without a history in the form of architecture is lifeless - but a city must also provide space to tell new stories. In this respect, it is not always an advantage to cling to old architecture without creating space for new living areas and useful space. As an example, he cited the Elbphilharmonie, whose construction was undoubtedly controversial in the early days, but has now become a landmark of Hamburg.

The evening ended with a relaxed get-together with drinks and finger food, during which the audience had the opportunity to talk to the architect and representatives of the Market Center Elbe in person.

Hadi Teherani - born in 1954 in Tehran, raised in Hamburg - is an internationally renowned German-Iranian architect and designer. Abu Dhabi, Dubai, Rome, Istanbul, Copenhagen and Tehran are just a few of the cities for which he has already realised projects. The architect has also designed numerous buildings in the home town of Engel & Völkers Hamburg. For example, his architectural office has designed the “Dancing Towers” at the eastern end of the famous mile Reeperbahn or the Dockland office building at Hamburg Harbour, both of which have the unmistakable signature of Teherani. With his work, Hadi Teherani is pursuing a holistic approach that focuses not on architecturally empty space, but on a harmonious overall concept of architecture and interior design. Therefore, in addition to his work as an architect, Teherani is also responsible for numerous furnishings, textile coverings and electrical appliances that are in harmony with his architectural language.