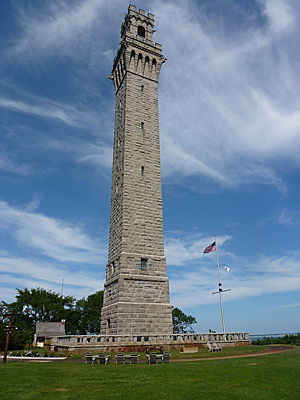 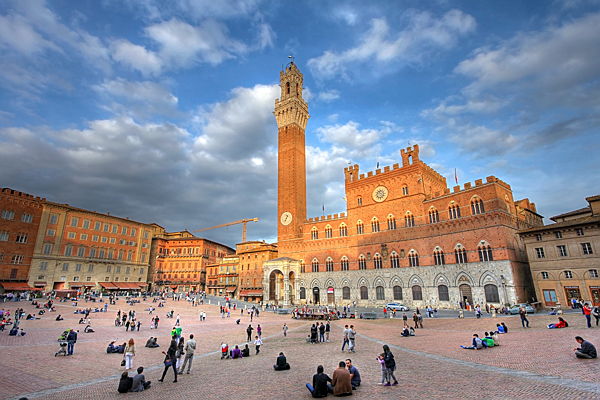 Torre del Mangia has a twin in the USA

Siena is famous for many wonderful monuments, but one of the most noticeable is Torre del Mangia. The tower is located just nearby the exquisite Palazzo Pubblico, in the city centre in Piazza del Campo. Completed in 1348, this 102m-high red-brick-and-travertine bell tower reveals magnificent views from its highest levels. Its name ('The Tower of Eater') comes from Giovanni di Balduccio, nicknamed 'Mangiaguadagni' (‘eat-the-profits’, or, ‘profit eater’), who was employed by the municipality from 1347 to 1360 to beat the hours on its bell. The role of bell-beater was later performed by an automaton, which, in memory of its predecessor, was called Mangia. The tower was built to point out that the secular power is just as important as the religious one (it is no coincidence the tower has the approximate same height as the cathedral's bell tower).

The United States have their own Torre del Mangia. It is called Pilgrim Monument and was built between 1907 and 1910 as a copy of the monument that dominates the Piazza del Campo in Siena. The American Mangia Tower is located in Provincetown, Massachusetts, not far from the most famous city of Boston and it is well worth a visit to watch it closely. The Pilgrim Monument was built to commemorate the first landing of the Mayflower Pilgrims in Provincetown on November 11, 1620. The designer was Willard Thomas Sears, a prominent architect in the late 19th and early 20th centuries. The base of the monument houses a museum to educate the public about Provincetown’s role in Pilgrim history and American history.

The two towers are not, however, perfectly identical, but present some differences. The most obvious is the height. The Pilgrim monument, in fact, is slightly smaller than the Sienese tower- 77 meters high. Moreover, the monument in honor the Mayflower Pilgrims is built in granite while Sienese tower is made of bricks and travertine. In addition, in the American tower there aren't some important Sienese elements such as Sunto (the large bell placed on the top of the tower), the clock and the public building next to it. However as a matter of fact, the shape of the two towers is absolutely identical.