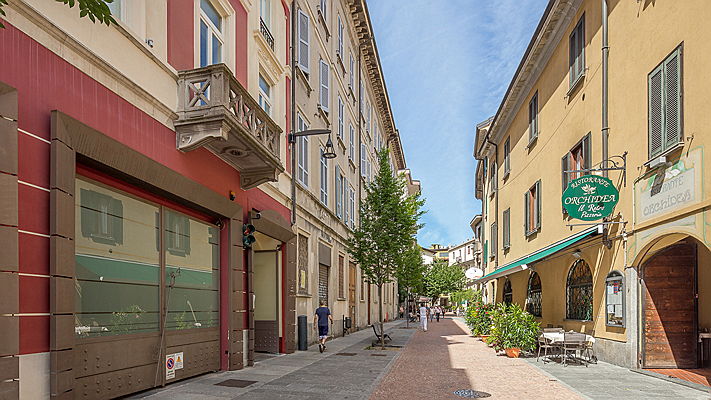 Entering a historic residence or a building with a particular artistic importance is a real privilege. Yet this is one of the prerogatives of many dream homes in our territory. Just take a look at a town rich in history like Varese to find valuable examples, perfect as a residential solution or to be transformed into splendid guest houses with refined charm.

An example? Let yourself be seduced by the story of one of richest in history houses in Varese for sale, directly from the voice of the experts Engel & Völkers.

The story of this wonderful two-room apartment in the historic centre of Varese starts from a distant time.

Its construction, indeed, is dated back around the thirteenth century, making it one of the oldest buildings in the city. This house is located inside a courtyard in via San Martino della Battaglia and is known for being one of the domus in use by the Humiliated, remaining so until the order was suppressed in the 15th century by San Carlo Borromeo.

Thereafter, the residence was used by the order of the Poor Clares until the Napoleonic age. But the most important historical event linked to this house in Varese is related to Giuseppe Garibaldi. According to what is reported on a marble plaque that is beautifully displayed at the entrance of the building, it was within the walls of this property that the hero of the two worlds found refuge and shelter for a night during the fight against the Austrians, which took place between Varese and the province in August 1948.

Even today, moving through the rooms of this house, it is possible to feel that particular charm of a place that was austere and solemn, as recalled by the imposing granite staircase that gives access to the apartment.

The houses in the centre of Varese that can claim the greatest historical and artistic value are those that fall within the circle of the ancient village (Via Veratti and Via Begaini), also including the area between Piazza Cacciatori delle Alpi and Piazza della Motta.

The uniqueness of this area is the narrow streets and the houses leaning against each other and the fact that it was bordered by 6 doors that led out of the Borgo. The property that houses this splendid apartment in the centre of Varese is located right near Porta di San Martino and the church with the same name, a building already mentioned in historical documents of 1233.

This makes the position particularly favourable to enjoy all the beauties and comforts of the city centre, without however renouncing the quiet that is appropriate for a prestigious residence or a small charming accommodation facility.

ENDLESS OPPORTUNITIES OF THE CONTEMPORARY DESIGN

When the living space and the architecture of the context make it possible, the contemporary design proposals become precious allies for those looking for a two-room apartment in the historic centre of Varese to buy and renovate to their taste.

And it is the case of this splendid apartment that offers a generous size and the right historical setting to give life to housing solutions of absolute beauty. When the goal is, for example, to recreate an intimate and welcoming atmosphere, the advice is to favour the furniture choices that highlight the splendid fireplace that dominates the living area or all those details that refer directly in the past such as the high ceiling with exposed beams, the balcony overlooking the internal courtyard or the majestic antique doors and windows.

If the priority, on the other hand, is comfort and wise division of spaces, the smartest interior design ideas are welcome, such as a spacious walk-in closet to embellish the sleeping area or an additional mezzanine environment to be equipped with every comfort. In conclusion, endless opportunities to be exploited at will to shape the ideal home.

Why wait? Contact immediately the Engel & Völkers Varese agency to book your visit to this wonderful two-room apartment in the centre of Varese right away.