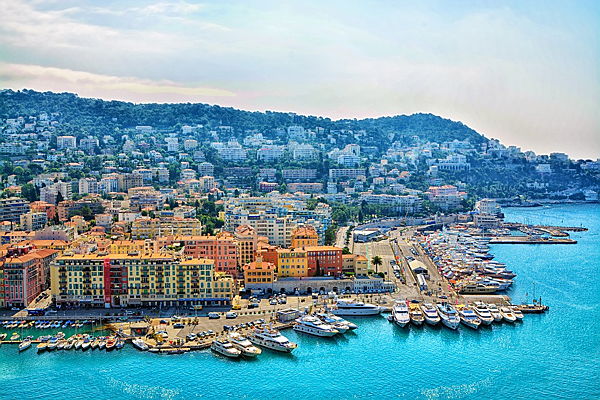 The Grand Palais, the Majestic, the Alhambra Palace in Nice, the Relais de la Reine in Cannes and even the Eden Palace in Cap d’Ail… There are so many exclusive and inspiring hotels and now you can get to live in them! In fact, several palaces on the Côte d’Azur have been converted into residential flats. There is something for all potential purchasers looking for an exceptional property.


Palaces of the Côte d’Azur, a symbol of the Belle Époque

They are characterized by their splendour, remarkable architecture, and ideal location. Today, these high-end Côte d’Azur hotels, which combine history, status, and novelty, have been converted into luxury flats.

Palaces of the Côte d’Azur, a response to a new kind of tourism

The Côte d’Azur has been a favourite destination since the Belle Epoque and was, in the past, particularly popular with the aristocracy thanks to its beautiful landscapes and mild climate. Although sunbathing and summer holidays by the sea were not yet in vogue the region became very popular when the weather turns colder. In fact, the Côte d’Azur attracted wealthy travellers looking for winter sun. They were known as “hivernants” (winter visitors) and generally stayed for several months while awaiting the return of the fine summer weather. Grand hotels sprung up in Nice, Cannes and even Menton, along the route of the new train lines, providing comfortable accommodation for these demanding travellers.

Hotel property owners certainly didn’t skimp on resources when it came to attracting this upmarket clientele. They called on renowned architects to build exceptional properties. Whether it was classical-style architecture or something more original, all eccentricities were tolerated as long as the building was sufficiently opulent and luxurious. These luxury hotels and palaces feature majestic halls, numerous reception rooms, beautiful parks and even winter gardens like the one at the Riviera Palace in Beausoleil. Thanks to their architectural beauty and the quality of the materials used, these palaces and luxury hotels have managed to stand the test of time.

A new lease of life for these exceptional properties

In response to developments in the tourism sector, from 1935 onwards, most of these hotels were divided up to sell as flats. You will find lots of exclusive flats in the old palaces, particularly on Cimiez hill in Nice, home to the Regina, the Winter Palace and the Riviera Palace.

Examples of some exclusive hotels that have been converted into flats

The Riviera-Palace hotel in Menton was established in 1898. It is set in 15 hectares of superb grounds and was initially just 3 stories high. It has been extended, over the years, with the addition of various outbuildings and even a theatre. After being requisitioned by the German army during the WWII, it was damaged by bombs and then closed in 1958 and converted into exclusive flats. The Riviera Palace in Beausoleil, built in a different architectural style, has also been converted into residential flats. It is characterised by its ornate façade featuring a succession of sculpted balconies and bow-windows. Its two-storey winter garden, covered by glazed panels, was built by Gustave Eiffel’s company.

Because of their magnificent appearance and historic character, many of these old, exclusive hotels, now converted into residential buildings, have been listed as historic buildings. This designation helps preserve these exceptional buildings but also restricts the occupants’ freedom when it comes to potential works or modifications. However, broadly speaking, only the façades and communal areas are protected, affording new owners greater freedom when it comes to refurbishing private flats.