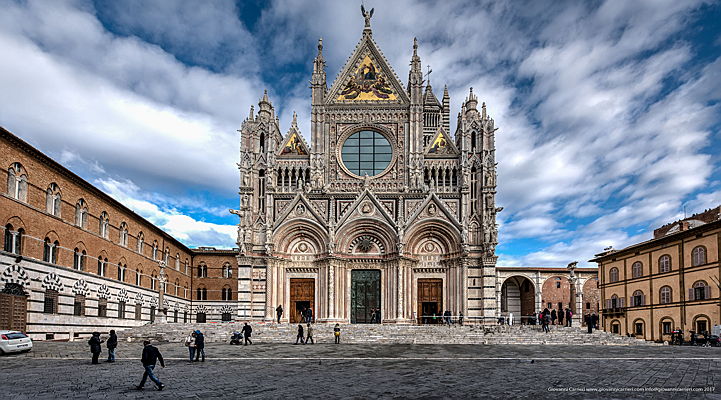 After the success of the past editions, the Opera della Metropolitana also proposes for 2019, "Il Duomo dei Senesi", the program of winter cultural events, strongly desired by Rector Gian Franco Indrizzi. There will be seven events to be able to know all the beauty of our Cathedral and create a real living room for art and culture. The Opera della Duomo intends to offer citizens moments of in-depth historical-artistic events of meetings, guided tours and conferences, on topics that gravitate around the magnificent monumental complex of the Cathedral, in a period of the year in which the lower tourist influx guarantees a quieter and emotionally engaging participation.

'Duomo of the Sienese'

, a Sunday event, evokes the theatrical space formerly located next to the Duomo, in the Museo dell'Opera, where the tragedies of Vittorio Alfieri were recited, the playwright and poet who had a privileged link with Siena, starting in 1766, when, while only staying there for a single day, he was immediately struck by the gentle way of speaking. Beyond the theatrical references, the "Saloncino" recalls the "salotti" (salons) that in Alfieri Siena loved to frequent tightening ties of friendship and establishing intellectual relations with the educated people of the city. During the afternoon, at the end of the conference, tasting of fine teas from all over the world.

(Awakening of art), Saturday appointment, wants instead to treat the different topics moving between the beauties of the monumental complex. After a welcome breakfast, in fact, the participants will be guided by the various speakers in a thematic path, being able to live with direct experience the contents of the various conferences.

The Duomo dei senesi 2019 will start on

in the Sala delle statue of the

"I dolci senesi. From the Middle Ages to the painters of the Panforte paper passing from the Paris of Les Miserabiles "

, a lesson held by Alessandro Leoncini.

. In the one with the Epiphany, among the gifts brought by the Magi, Nicola depicted a small basket filled with small lozenges that remind our family

, which are nothing but marzipan paste. Since that time, together with

, marzipan was one of the traditional Sienese sweets and, when they passed from Siena, kings and emperors were often offered covered with gold, a non-toxic and digestible substance. At the end of the nineteenth century, with the beginning of the industrial production of sweets, it was necessary to create wrappings that would allow the immediate identification of the dessert with the city, and thus a sort of artistic current was born formed precisely by the so-called "

At the end of the conference, as usual, it will be possible to participate in a tasting of fine teas from all over the world.