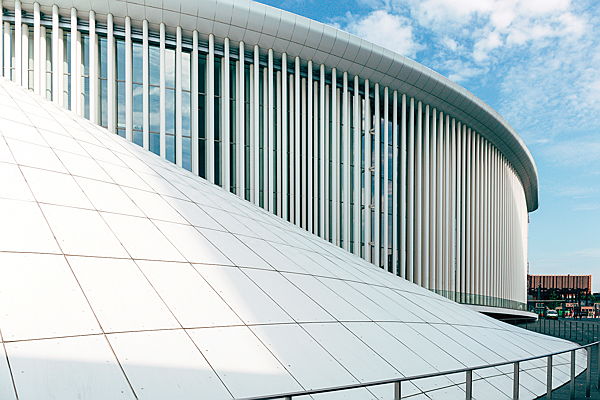 Located on a plateau in the north-east of the city, the Kirchberg district is above all a district of economic and administrative activities. But it is also an essential place in terms of art and contemporary architecture. Kirchberg is currently undergoing a definite development and should become one of the most attractive districts for those who wish to live close to their workplace and the city centre.

While in the 1970s it was only a vast plateau dotted with fields and crossed by a expressway, Kirchberg is today an economic centre of European level. Banks, international companies, European institutions and commercial spaces have established themselves there and make the district one of the most important places in the capital of the Grand Duchy in terms of business and administration. Very clearly the Luxembourg banking and financial heart is pulsating in Kirchberg. But the latter has two other faces that deserve a visit: in the former Kirchberg the businessmen give way to students while the south-western part of the plateau offers a more touristic atmosphere. When you come from the city centre, simply take the "red bridge" (Pont Grande-Duchesse Charlotte) designed by the German architect Egon Jux (1963) to let yourself be seduced by the curves of Christian de Portzamparc's Philharmonie. In Kirchberg, there is also the European Court of Justice of Dominique Perrault and the Museum of Modern Art Grand Duke Jean (MUDAM) of Ieoh Ming Pei, the great architect of the Louvre Museum. But the architectural tour does not stop there, since Kirchberg is also Christoph Ingenhoven's European Investment Bank district and the development of Place de l'Europe, designed by Ricardo Bofill.

Located a stone's throw from Luxembourg-Findel airport, Kirchberg is very well served by the capital's public transport system. In addition, the tramway runs through the district, which also has more than 50 bus stops served by 7 lines. The most sporty will appreciate the 14 self-service bicycle stations that allow you to travel while preserving the environment.

The Kirchberg district has 6 schools from kindergarten to university. In terms of leisure, the district includes a major shopping centre as well as a cinema and a multi-sport complex. In addition, the Kirchberg hospital centre allows its residents to receive care within their own residential area. Finally, there is a 12,500 m² hypermarket and about fifty shops in its shopping mall.

A district in the midst of change

Although Kirchberg now has less than 5000 inhabitants, the district is now home to many Special Development Projects (PAPs) aimed at rebalancing housing supply and demand. In the coming years, the district's objective is to reach 6800 housing units compared to barely 1400 today. In order to pursue this objective, the government and the Kirchberg Fund are financing the construction of nearly 2,300 housing units in the design district of the capital par excellence. These figures clearly illustrate the importance of the transformation of the real estate market in this part of the city. No less than 260 new apartments are expected along John F. Kennedy Avenue between Place de l'Europe and La Coque, 400 in Kiem and 500 in Réimerwee East and West.

Investors have already clearly identified the potential of this neighbourhood. Engel & Völkers, an expert in high-end real estate, is closely following this development. Its branch in Luxembourg City welcomes you to study your projects in detail. Medium-term profitability could well be in the Kirchberg district, which could well reserve some very good opportunities! Engel & Völkers guides you towards them and accompanies you through each step of your acquisition. A professional and personalized support for the realization of your real estate project in complete serenity.

Contact us now
Engel & Völkers
Licence Partner Luxembourg
Thank you for your request. We will contact you shortly.