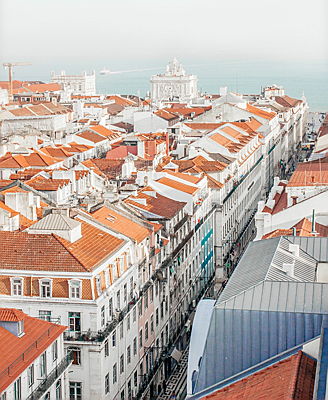 Investing in the Portuguese capital

Investing in the Portuguese capital means investing in a growing global region that has several benefits. Find out the main reasons why you will succeed with your investment in Lisbon.

The Portuguese capital, Lisbon, is a cosmopolitan, diverse and multicultural metropolis. In addition to its historical heritage, there is a daily increase in building constructions, where avant-garde and modernity prevail. This path for development goes side by side with tradition in this city. Lisbon is, therefore, a city that is continuously growing - without forgetting its roots.

The past and the future coexist in the streets of Lisbon and there are several reasons to choose this city when investing in property. From culture to art, economy, tourism, tradition, security and accessibility; this is one of those Portuguese cities where investment is more secure and offers better return prospects.

Today, we will reveal some of the reasons why you will benefit from investing in the Portuguese capital.

1. Lisbon as the World Capital

Lisbon is the capital of Portugal but it's also a world capital city. The world has its eyes set firmly on this metropolis that has often reached the top of the world rankings.

In recent years, Lisbon has been considered the best city to live in, a metropolis with a balanced quality of life and cost of living, the most welcoming city in the world, the best holiday destination and even one of the cities with the lowest crime rate and highest level of security.

These rankings released by several renowned sources, including Forbes magazine and the Institute for Economics and Peace (IEP), prove that Lisbon is under strong international observation and is a highly praised city around the world.

2. Lisbon as an Economic Hub

The awards granted to Lisbon are not its only achievements. This city enjoys great economic stability and has been the centre of development for several solid national and international projects, which help to ensure the growth of Lisbon.

This city is now a central hub for information, technology and culture, which can be seen through the internationally renowned projects, such as the Web Summit, which chose Portugal as a convergence point for hosting meetings.

3. Lisbon as History and Tradition

The city of Lisbon is also a great place to invest in due to its heritage. Besides the many monuments that help make the city a point of undeniable tourist value, such as the Jerónimos Monastery, the old town and the National Pantheon; this city has preserved its intangible heritage, which it expresses through the locals, customs, and the artistic expressions. Fado, for example, has been considered by UNESCO as the Intangible Heritage of Humanity.

The climate of the city must also be mentioned. It is mostly sunny with mild winters and hot summers, which entices tourists to pay a visit to the surrounding beaches. The festivals, like the Popular Saints of Lisbon, also make the city a vibrant destination.

4. Lisbon as an Accessible Destination

Access is the other important factor for any investment and, at this point, Lisbon continues to stay in the lead.

Besides its privileged central location, Lisbon also has an excellent transport network, containing many train and bus stations as well as an international airport.

Within the city, this accessibility is also expressed by the offer of various traditional and tourist public transport, especially the metro, trams, and buses.

The accessibility of Lisbon is one of the biggest attractions of this city's multiculturalism, and for that reason, it is also possible to see the local re-development projects that are adapted to what is best done abroad. A strong example was the transformation of an abandoned industrial zone into what is now known as the LX Factory, a highly acclaimed cultural site.

5. The Other Advantages of Investing in the Capital

The above are not the only reasons to invest in Lisbon. The Portuguese capital is also a place of diverse flavours, with a rich gastronomy; a place where work and educational opportunities are highly valued in various companies, schools, colleges and universities; where the job market has become increasingly international, thus allowing a global career progression and also a place that welcomes both domestic and foreign investors.

There is no shortage of reasons to invest in the Portuguese capital. This developing city is a safe place for such a venture. If you want to get the best out of the property market or if you are thinking of living in this city, you can count on Engel & Völkers.

This company has more than 40 years of experience and is based in more than 3 dozen countries around the world including the city of Lisbon and can help you find the right place to live and invest in this wonderful city.

Contact Engel & Völkers now and enjoy all the advantages of investing in the Portuguese capital.​