The entire licensed territory of Geneva accounts for over 230,000 housing units, of which around 1/3 are residential properties. This in turn has a sales potential of over CHF 4 million, although it may be worthwhile for a prospective license partner to offer the rental sector. If the PAV project gets the green light, another 12,000 housing units can be added.

Engel & Völkers is already well represented with locations in Nyon and Montreux in the surrounding regions. Another location in Geneva, the second-largest and capital city of Switzerland, would not only strengthen Engel & Völkers’ cross-selling and supply system in western Switzerland, but also nation-wide.

Are you interested in the housing market in and around Geneva, and do you want to become part of Engel & Völkers successful franchise-system and write your own success story! Find out more about our free license area in the article below and get in contact with us. We are looking forward to hearing from you! 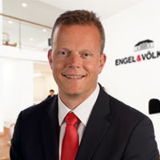 The capital of the canton by the same name lies on the southwestern corner of French-speaking Switzerland (Romandie)in the region of Lake Geneva. With 200,000 inhabitants, Geneva ranks right below Zürich as Switzerland’s second-largest city . Also known as the capital of peace, Geneva is the home of many international organizations, such as the UNO and the Red Cross. Besides being a congress city, Geneva is also a centre of culture and history, for trade fairs and exhibits. “L'horloge fleurie”, the flower clock at Jardin anglais, is the world-famous symbol of Geneva’s clock industry.

The property market in Geneva and along Lake Geneva continues to profit from the region’s positive economic momentum. There is continual demand for residential properties under CHF 1.5 million in particular, which are in short supply and influencing a stabile price trend. Even expensive properties of over CHF 4 million in value are in demand. Nevertheless, there is pricing pressure in this area, actually resulting in falling prices around the city of Geneva.

Most in-demand places – Cologny and Bellevue

Next to Zürich, Geneva has proven for years to be among the cities offering the best quality of life in the world and at the same time with the world’s highest cost of living. With millionaires making up 20% of its population, Geneva ranks behind Monaco as the city with the second-highest concentration of millionaires. The villa communities of Cologny and Bellevue are extremely sought-after top locations.