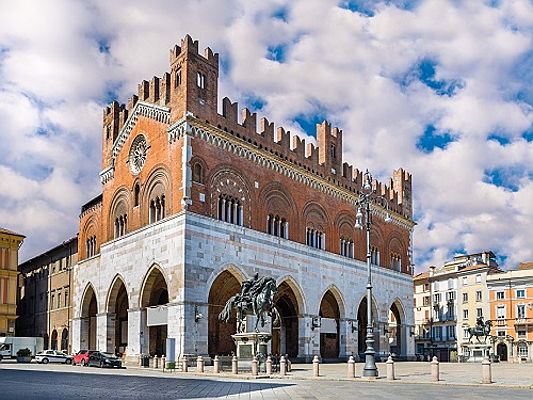 The city of Piacenza is located in the middle of the Po Valley, on the right bank of the river Po, occupying the north-western end of the Emilia Romagna region.

Only 67 km separate it from Milan, with which it is very well connected thanks to the two road bridges and two rail bridges over the Po.

Piacenza, the terminal point of the ancient Via Emilia, is nicknamed 'The Firstborn' because it was the first Italian city to vote for annexation to the Kingdom of Sardinia by a plebiscite, held in 1848.

A city overflowing with beauty

Piacenza is a particularly attractive town because it combines architectural and artistic beauty with the peace and tranquillity of a provincial city, where the quality of life benefits from the richness and pleasures of its gastronomic heritage.

The rich history of this city of Emilia is particularly evident in several of the buildings that adorn it. The Cathedral, the Gothic Palace and the Palazzo Farnese, to name just a few, testify to its grandeur.

Especially typical are the narrow alleys in the city centre that offer pleasant surprises and guide your discovery of all the noble palaces and beautiful churches that adorn Piacenza.

The Piazza dei Cavalli is undoubtedly the emblem of the city, with its two equestrian statues — sculpted by the Tuscan sculptor Francesco Mochi from Montevarchi, in the seventeenth century — against the backdrop of the Gothic Palace.

The Piacenza real estate market is undoubtedly influenced by the presence of a significant amount of luxury properties in the city.

An increasing number of real estate transactions, in fact, relate to the premium segment of the market — properties that are, among other things, prestigious, stately and in excellent locations.

However, analysing the sector as a whole and not focusing exclusively on the luxury segment, data from Inland Revenue, relating to the number of real estate sales recorded in the course of the past year, are extremely interesting.

In the municipality of Piacenza alone, in fact, recorded transactions reached the remarkable figure of 1,337 — a number that is certainly encouraging if we consider the context of the current market!