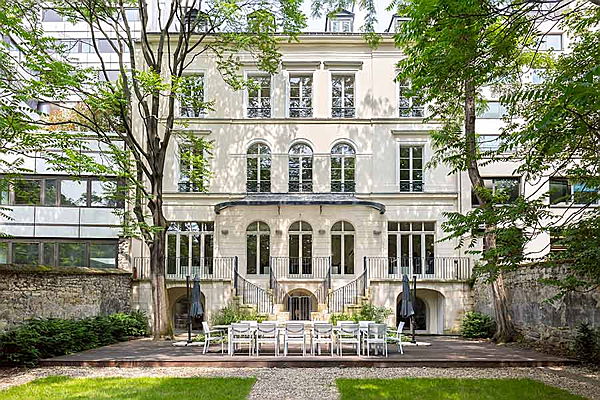 The mansion house located at 24 Rue de Berri, now called the Hôtel Cornudet des Chaumettes, has been converted to offices to host the Engel & Völkers Paris headquarters. This property possesses a particular history: it was one of the last structures in this area of Paris to belong to the Royal family and many other important families after that.

A luxurious property located in a historic area


The location at Rue de Berri is ideal. It is at the heart of one of the most influential business areas of the French capital, with direct access to the famous Champs-Elysées.

A long time ago, however, before the influx of big companies wishing to establish themselves here, Rue de Berri was nothing more than a village surrounded by swamps and forests on the doorstep of Paris. From 1640 onwards, Rue de Berri and the adjacent streets were used as a royal nursery, preserving trees and flowers for the king’s residences.

Under the Regency, the Currency Director, whose new Hotel had just been built, set up a housing development project. Unfortunately, this project was never completed. In 1755, the Saint-Florentin Comte, Secretary of State for the Royal household, acquired the grounds of the former royal nursery, which he gave to his mistress the Langeac Comtesse in 1765.

A few years later, in 1772, she sold the field to the Comte d'Artois (Louis XVIth youngest brother), who had plans to build housing.
This real estate project helped develop new streets, such as Rue de Ponthieu, Rue d'Angoulême (which would later become Rue de la Boétie) and Rue Neuve-de-Berri, adjacent to Rue de Berri. The latter emerged at the same time as the aforementioned streets and was first called Ruelle de Chaillot, then Ruelle de l'Oratoire.

After being enlarged and paved, the street became Rue de la Fraternité, and finally, in 1848, Rue de Berri, as we now know it today. In 1864, the street was extended to Boulevard Haussmann, originally running only to Rue du Faubourg Saint-Honoré.

Rue de Berri has today evolved into the centre of the business district, attracting many big companies to its strategic and prestigious location, within walking distance of the Champs-Élysées.

Despite all these changes throughout history, some relics from the past are still present in this street, such as the imposing Hôtel Cornudet des Chaumettes, occupied by Engel & Völkers.

The history of a unique mansion


Four years ago, Engel & Völkers Paris, the luxury real estate agency, settled in a prestigious and ideal location in the French capital, between the Champs-Élysées and Boulevard Haussmann.

The mansion was built in 1825 by Dominique Bureaux, a lawyer at the time. However, he decided to sell the property only 2 years after having it built, to Armand Amé from Saint-Didier, a magistrate and Knight of the Legion of Honor. He was the son of Alexandre Amé of Saint-Didier, Baron of the Empire and Peer of France under Napoleon.

The property was then ceded to a family from Brittany in 1858, with Charles, Prince of Talmont and Duke Trémouille, as heirs.

In 1872, Louise Fould, niece of Achille Fould, who was the Finance Minister under the Second Empire and an advocate for free trade, bought the mansion.


As an Art history and literature lover, Louise Fould transformed ‘24 Rue de Berri’ into a literary parlour that became one of the most famous and popular ones in Paris.

The mansion welcomed many famous contemporary authors, such as Gustave Flaubert, Marcel Proust, Alexandre Dumas, and Théophile Gautier.
In 1886, the property was once again sold, this time to the Cornudet des Chaumettes family.

Since then, the mansion is still owned by the same family, which make the current owners the heirs of the Comte de Cornudet.

Read also : A guideline to have your property classified as a historical monument