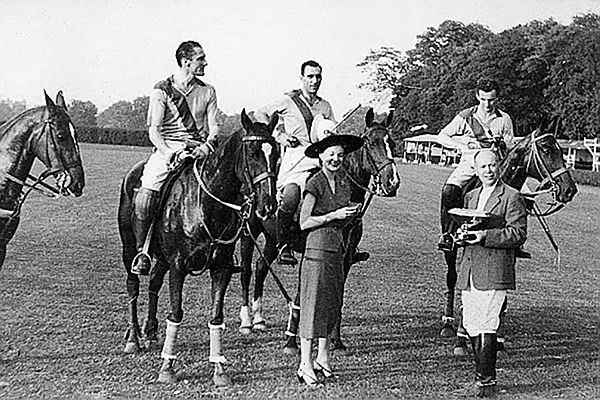 The birth of the Polo Paris Club

While the first polo club in the world was created in India in 1859, it was in 1892 that ‘Polo de Paris’ was born. It has since become one of the most mythical courts on the planet.

The oldest team sport in the world (-600 BC), which has been played for a long time in a war like and disjointed way, began to gain structure and more peaceful manners at the beginning of the 19th century thanks to the English (among others), who were stationed in India and were truly passionate about polo.

The first polo club in the world was established in Silchar, India, in 1859 and the first in England opened in 1872.
Only twenty years later, the Paris Polo Club was founded and since then has become one of the most emblematic courts in the polo world.

Polo in the capital


Though some bourgeois mansions were built at the beginning of the 18th century on the lawn of Bagatelle, it is only in the spring of 1891 that the first polo games were played there, specifically in the ‘Tir aux pigeons’ (Pigeon shooting) area to begin with and then in the middle of the ‘Bois de Boulogne’.
A group of young people passionate about polo, led by the ‘Vicomte de la Rochefoucauld’, the ‘Duc de Doudeville’ and the Raoul Duvall brothers, started to attract players and spectators.

Soon enough the lack of space at the ‘Tir aux pigeons’ began to cause a problem, so they had to leave this field. With an annual lease of 15,000 francs at the time, they settled on the current location of the Paris Polo Club, which was then used by military officers as a training ground for jumping.
There were then more than twenty players who decided to build a suitable court surrounded by a club house. This is how the Paris Polo Club emerged in 1892.

The strong involvement of Spanish players such as the Comte de Uribarren, who made the plans for the club, the ‘Marquis de Villavieja’ and Luis de Errazu is notable in the creation process.
‘Vicomte de la Rochefoucauld’ became its first president, supported by a committee of twenty influential members.

A mythical trophy offered by the Hurlingham Polo Club


On April 15th 1893, the first real polo season began, formalised by the invitation of the British teams of the 17th ‘Lanciers’ and Rugby for a match that made history.

The English, exporters of the sport across the world, left no chance to our French players… but more essential was the event itself and not necessarily the game result.

The ‘Polo de Paris’ then decided to create its own international tournament in 1895 and each year give a sublime trophy, offered by the legendary ‘Hurlingham Polo Club’ in 1894.

Soon "Polo" as we know it then became the latest place to be, the new club that counts.

The olympics and the Polo Paris Club


From 1900 to 1936, polo was featured as an Olympics discipline five times. Within this period, France won the competition twice, in 1900 and 1924, and ‘Polo de Paris’ can be proud of having being part of this prestigious sporting event.

In 1924, nine out of ten games were played at the Country Club of St Cloud because Bagatelle, for lack of sufficient seating, only hosted the Great Britain vs France game. Jules Macaire, a member of the French team, then started an incredible dynasty of high level players since his son Jacques and his grandsons Lionel and Stéphane were all high level polo professionals.

This penultimate edition of polo at the Olympics was also important for the sport itself as the Argentinians, who won 6-5 in the last seconds against the USA, gave their country its first gold medal. Welcomed back as heroes upon their return to Buenos Aires, they helped make polo the second most popular sport in Argentina. Since then, Argentinian players and horses have been demonstrating their talents all around the world.

In 2019, the Paris Open Engel & Völkers will celebrate its 125th edition and despite disruption during certain years, especially in times of war (in 1973 it was even played in September rather than June because of an equine flu), over time this tournament has become world famous.

Even if it is does not show the highest level of polo, its history and the history of the Paris Polo Club make it legendary and many international players dream to put their name on the Cup, to join the fabulous players that are the Rothschilds, Macarius, Couturié, Montbrison, Terrail, from Balkany for French people and Gracida, Rubirosa, Alberdi, Moore, Merlos, Heguy or Gaztambide for international people.

Alexandre worked on Direct 8, Equidia, France 2 and on radio with Philippe Gildas
Polo specialist, he is double champion of France and was handicap 2.
The only professional commentator for Polo, since 1989 he has been leading matches for spectators on the field (Paris, Chantilly, Deauville, St Tropez, POPB Bercy) as well as for television (Equidia, Direct 8)
Member of the French Polo Federation