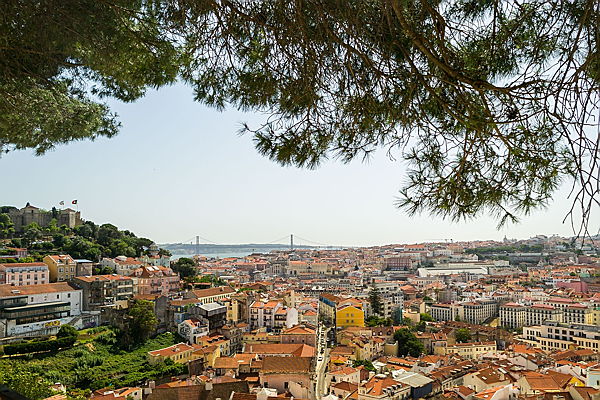 Lisbon and its 7 hills

The 7 hills of Lisbon are part of its history and help create the myths that permeate the Portuguese capital. Do you know the 7 hills and their most symbolic points? Well, it's time to find out more about them.

Legend has it that Lisbon, just like Rome, was born among seven hills. These hills were São Roque, São Jorge, São Vicente, Santo André, Santa Catarina, Chagas and Sant'Ana.

These hills are still important points of the city today, integrating several poems and songs that talk about the Portuguese capital.

For those who live in the city of Lisbon and for those who visit it, these hills become an inescapable point of interest, thus encouraging one to rent a Tuc Tuc to be able to cross the several hills and to get to know the marvels of the various viewpoints, which offer the most beautiful views over the city of Lisbon.

On these hills, tradition still lives and vibrates through the Portuguese capital, boasting several places of leisure and of high heritage value. By walking through the hills, you can enjoy various churches and monasteries, learn more about the Lisbon tiles or visit some of the most emblematic points of the city, highlighting Baixa Pombalina and São Jorge Castle.

In order for you not miss out on what Lisbon has to offer, we will now explore the seven hills of Lisbon. Come and learn more about them.

The São Roque Hill is in the vicinity of Santa Catarina Hill and in the area known as Bairro Alto.

This Lisbon hill is home to one of the most beautiful viewpoints of the city, Mirador de São Pedro de Alcântara and has several points of interest to visit.

Being the highest hill, at the top of this hill and right in the Jardim de São Pedro de Alcântara there are some of the most beautiful views of the capital, on the slope of Mouraria and the Castle of São Jorge.

This hill houses the famous Castle of São Jorge and also a part of Alfama. According to legends, it was on this hill that the town that came to give origin to the city and its first houses appeared.

For many, São Jorge Hill has the best views over the city and, in fact, in the Miradouro do Castelo it is possible to enjoy a wonderful panoramic view over the city of Lisbon, with the river Tejo within sight.

The Castle is a must-see, not only for its sights but also for its rich history and the wonder of its ancient cannons.

This hill stands out for its traditionality, being the central point of one of the most traditional Lisbon neighbourhoods: Alfama. Here you will find the Convento de São Vicente de Fora and the wonderful Mirador de Santa Luzia.

In the viewpoint of this hill you will have fabulous views over the river Tejo and, in addition, this is one of the places where you can appreciate the wonders of the Lisbon tiles, which are also part of its tradition.

It is also on this hill, more specifically in Campo de Santa Clara, that on Tuesdays and Saturdays you can enjoy the Flea market Fair.

This is one of the most romantic places in the city, with wonderful views of the town and with excellent examples of tiles.

In this place can enjoy the walk in the famous electric 28, an emblematic point of lisbon.

The Santa Catarina Hill is located between Largo de Camões and Calçada do Combro. Its belvedere is the Miradouro de Santa Catarina (or Adamastor), one of the most beautiful spots in the city to enjoy the sunset.

In this place you can not miss the statue of Adamastor or drinking a beer on the esplanades of Misericórdia.

This hill is integrated in the region of Rua de Chagas and Largo do Carmo. In this region you can pay a visit to the Convento do Carmo, the Elevador de Santa Justa and also the historical area of Rossio and Chiado.

At the top of the Santa Justa Elevador you will be able to observe one of the most beautiful views over the Castle of São Jorge and the city.

The Sant'Ana Hill stands out for its Mirador de Torel, one of the least known sites of the city, and is in the vicinity of Campo Mártires da Pátria, located in the parish of Santo António.

This was the hill that housed the Monastery of Our Lady of the Announced (Nossa Senhora da Anunciada), where Dominican nuns resided. Historically it was also an important place after the Lisbon earthquake, and was the site that housed the various hospitals.